The 14th edition of the Indian Premier League (IPL) 2021 will be commencing on April 9 in Chennai on April 9 with the first game scheduled to be played between Mumbai Indians (MI) and Royal Challenges Bangalore (RCB), the BCCI has told the IPL franchises. There will be no home games and the Board has shortlisted six centers, including Mumbai.

The Narendra Modi Cricket stadium in Ahmedabad, where the last two Test between India and England took place, will be hosting the playoffs and the final of the marquee event. The BCCI confirmed in an official statement that no team will play at a ‘home’ venue. Each team will play in four of the six venues in the group stage.

ALSO READ: MS Dhoni Gets A Warm Welcome As He Visits Chennai For IPL 2021

The 56 matches in the group stage have been split into 10 games each in Chennai, Mumbai, Kolkata, and Bengaluru, while Delhi and Ahmedabad will host eight. Each team is set to play at four venues during the league stage. One of the highlights of this edition of the VIVO IPL will be the fact that all matches will be played at neutral venues, no team will play at their home venue.

The season will kickstart on 9th April in Chennai and the final will take place on May 30th at the Narendra Modi Stadium, Ahmedabad.

ALSO READ: Kumar Sangakkara Reveals Ben Stokes Will Not Bowl Much In IPL

The BCCI has scheduled the game in such a way that every team will travel only three times during the league stage, which will be reducing the commute and risk of players’ safety. The VIVO IPL 2021 will be played without the presence of the crowd in the initial stages of the tournament and a call on allowing spectators will be taken at a later stage of the tournament.

Here is the complete IPL 2021 schedule: 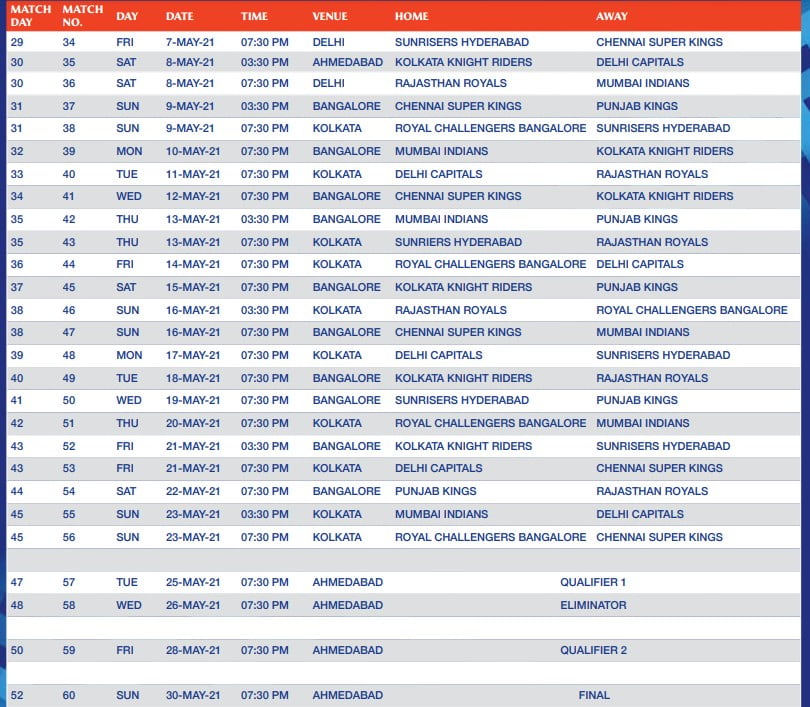 News
By SMCS - Aug 13, 2022
Aakash Chopra opens up on the T20 leagues’ impact on international cricket