On Sunday, the Board of Control for Cricket in India (BCCI) announced the complete schedule of the upcoming edition of the Indian Premier League (IPL) 2022. The 10-team IPL season will get underway on March 26 with the opening game will be played between the last season’s finalists, Chennai Super Kings (CSK), and Kolkata Knight Riders (KKR) at the Wankhede Stadium in Mumbai.

The BCCI had earlier announced that there will be 70 league matches in the 10-team season as two new franchises with Lucknow Super Giants (LSG) and Gujarat Titans (GT) joining the bandwagon. The matches will be played across 4 Venus in Mumbai and Pune. The final of IPL 2022 will be held on May 29.

The 10 teams have been divided into 2 groups of 5 teams each. The BCCI did not go for a draw unlike football competitions but grouped the 10 teams based on the number of titles they have won and the number of finals they have reached. 5-time champions Mumbai Indians will begin their campaign on March 27, which will be the first of 12 double= headers in the league stage of IPL 2022.

Punjab Kings will face Royal Challengers Bangalore in the 2nd match on March 27. The teams were divided into two virtual groups with Mumbai Indians, who are the most successful side, headlining Group A. Chennai Super Kings, with 4 titles, headline Group B. New sides Gujarat Titans and Lucknow Super Giants will begin their campaigns going against each other on Monday, March 28.

🚨 NEWS 🚨: The Board of Control for Cricket in India (BCCI) announced the schedule for #TATAIPL 2022 which will be held in Mumbai and Pune.

A total number of 70 league matches and 4 Playoff games will be played in the duration of 65 days.

SunRisers Hyderabad (SRH) and Rajasthan Royals (RR) will be the last two teams to kick off their campaigns on March 29. There will be a total of 74 matches in IPL 2022 with the BCCI set to decide the fixtures and venues for play-offs on a later date. Each team will be playing 14 matches in the league stages. With each team set to play 14 games in the league stages, a team will play twice with the teams in their group and with the team in the same row in the second group

For instance, according to the schedule, MI and CSK are in the same row despite being in different groups. With the rest of the teams in the second group, they will play only once during the season. Chennai Super Kings will be eyeing to defend their title but it will not be easy as 10 teams will battle for the ultimate prize as the IPL 2022 returns home. 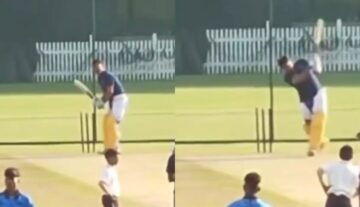