Sunrisers Hyderabad (SRH) will be locking horns with Gujarat Titans (GT) in the 21st match o the Indian Premier League (IPL) 2022 at Dr. DY Patil Sports Academy in Navi Mumbai. Under the captaincy of Hardik Pandya, GT has been unbeaten so far and they will be looking to continue their winning momentum against Sunrisers Hyderabad, who won their first game of the tournament against Chennai Super Kings (CSK), when they last time took the field.

SRH defeated SCSK by 8 wickets while chasing a target of 155 runs, thanks to a superb 75-run effort from youngster Abhishek Sharma. When the SRH and GT face each other, they will be looking to keep their winning streak going. SRH’s bowling prowess against CSK, as well as the performance of their top-order, will give the Orange Army a lot of confidence going into their match against Gujarat.

The Gujarat Titans, on the other hand, are on a roll. The new franchise has won its first three matches and they have got better with every game. GT won a last-ball thriller against Punjab Kings. Rahul Tewatia smashed six in the final two balls to help Gujarat Titans cross the finish line and maintain their perfect tournament record.

Bhuvneshwar Kumar and Co. will be finding it difficult to keep Shubman Gill quiet. But if they manage to do that, GT’s middle order will be under the pump. Remember, Hardik Pandya is batting as high as number 4 now and the rest of the lineup comprises the likes of David Miller, Rahul Tewatia, and Abhinav Manohar. SRH also has a favorable match-up against the Titan’s top order with Washington Sundar appearing to be a good option against Matthew Wade and Sai Sudharsan.

Even though Abhishek got runs against CSK, it will be difficult for him to face the likes of Mohammed Shami and Lockie Ferguson. At the other end, the fact that Shami has dismissed Kane Williamson four times already in T20s. Time is probably running out for Matthew Wade as he has scored 37 runs in three games and those numbers have gone under the radar as a result of the cracking start made by the Titans. One more failure will likely bring Wriddhiman Saha or Rahmanullah Gurbaz into the mix. 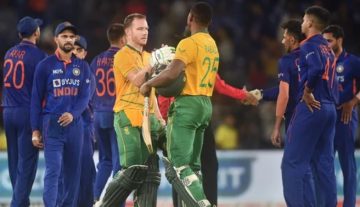