The Indian cricket team locked horns with the Ireland team for the first T20I of the 2-match series in Dublin on Wednesday and after winning the toss, the Irish skipper Gary Wilson once again elected to bowl, reasoning that in this venue its difficult for the teams to defend the total. However, the Indian scoreline is suggesting that Wilson’s decision became all wrong as KL Rahul (70), who opened the innings with skipper Virat Kohli, built a partnership of more than 100 runs for the second wicket with Suresh Raina (69).

Rahul and Raina smashed almost all the Irish bowlers but the final over of Kevin O’Brien, became a standout one as Hardik Pandya smashed two sixes and a four in the over on third, fourth and Fifth ball of the over.

The first six was almost the fourth wicket by O’Brien, but no, the ball was full outside off and Hardik forced to reach at the ball. Slices this slog over long off, and Porterfield is a mere spectator in the deep. This ball was followed by a ball outside off and there was no guessing that Pandya loves that length. Opens his stance, and then drills it over KOB’s head.

O’Brien bowled fifth ball short outside off, and Pandya flat-bats it past the bowler. Mid on does well to make a lot of ground, but his diving stop just isn’t good enough. Here is the video of the over: 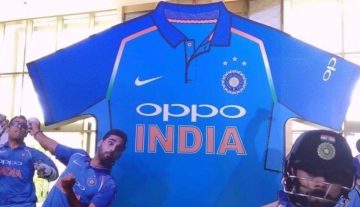 Article
By CricShots - Aug 9, 2017
Significance of the three stars on Indian jersey