The Indian cricket team locked horns with the Ireland team for the first T20I of the 2-match series in Dublin on Wednesday and after winning the toss, the Irish skipper Gary Wilson elected to bowl, reasoning that in this venue its difficult for the teams to defend the total. However, the Indian scoreline is suggesting that Wilson’s decision became all wrong as the Indian openers gave a dream starts by registering an opening partnership of 150+.

Rohit Sharma and Shikhar Dhawan opened the innings for India and they amassed 59 runs in the powerplay. They went on to make the partnership of 160 runs, its India’s second highest partnership for any wicket.

WATCH: An eventful over of George Dockrell

However, in the final over of the match, India lost three wickets of MS Dhoni, Rohit and Virat Kohli which was bowled by Peter Chase as all the batsmen were looking to smash the ball out of the ground. However, the something unusual happened on the final ball of the innings as Hardik Pandya pulled off a helicopter shot and the ball went straight over bowler’s head for a six.

India finished the innings with 208/5 with Sharma missing the chance to score his third T20I century as he was clean bowled by Chase in the final over.

Here is the video of the helicopter shot by Hardik Pandya: 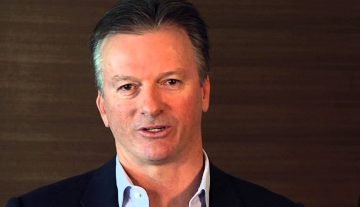