Mumbai Indians (MI) registered another dominating win over Delhi Capitals (DC) in the afternoon affair of the Indian Premier League (IPL) 2020 on Saturday. Despite the fact that the match was between two heavyweight teams, the game was quite one-sided owing to a brilliant bowling spell of Jasprit Bumrah, who scalped three wickets followed by another flamboyant half-century by Ishan Kishan. Subsequently, the Shreyas Iyer-led side continues its losing streak.

After winning the toss, the MI skipper, Kieron Pollard asked Delhi to bat first on a two-paced pitch. As it unfolded, the pace trio spearheaded by the brilliant Bumrah came out all guns blazing as Trent Boult drew the first blood in the form of Shikhar Dhawan. Even, Prithvi Shaw failed to do much as wasted his wicket at a paltry 10 runs. The pressure kept on increasing on the Iyer and Rishabh and as a result, the DC skipper was stumped for 25 runs owing to cheeky glovework by Quinton De Kock.

After the heavyweight’s dismissal, it was a one-man show as Bumrah gave nothing away to the Delhi batsmen as he grabbed the crucial wicket of Rishabh Pant and Marcus Stoinis. While the former was lbw after mustering a meagre 21 runs, the latter had to show his back after a blinder of a delivery edged of De Kock. Eventually, Delhi appeared to be nowhere as they lost 5 wickets for 62 runs and eventually, they only managed to score only 110 runs after the end of 20 overs thanks to a massive six hammered by Kagiso Rabada.

The MI openers showed no hurry in chased down the meager target as Quinton De Kock and Ishan Kishan added 68 runs in the first 10 overs smashing 9 electrifying fours. Anrich Nortje got the wicket of De Kock was the only consolation in the innings for the Capitals. As the target was coming close, Kishan again displayed his prowess scoring an unbeaten 72 proving his worth for MI once again which helped Mumbai to chase down the total in the 15th over itself.

Ishan smashed a huge six against Nortje in the 15th over high over deep square leg for a six to seal the game. The shot stunned including Rohit, who was enjoying the game sitting in the dugout along with support staff Zaheer Khan and Robin Singh. Here is the video of the shot:

An emphatic win for @mipaltan as they beat #DC by 9 wickets.@ishankishan51 with an unbeaten knock of 72. 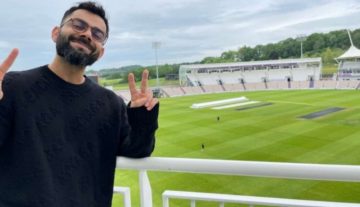