The veteran English fast bowler, James Anderson made a brilliant effort in an attempt to take a miraculous catch standing at mid-on to dismiss the Australian fast bowler, Mitchell Starc on 9 runs in the ongoing Boxing Day Test at the Melbourne Cricket Ground. Australia has scored a total of 267 taking a lead of 82 runs in the first innings courtesy of 76 runs from their opener, Marcus Harris.

The 5-match Ashes series 2021-22 had commented earlier this month and currently, the Australian team is leading the series by a 2-0 margin. The hosts have been a dominating force throughout the series and they are also playing well in Melbourne. Australia bowled out England on 185 in the first innings. Joe Root scored a half-century in the first innings for the visitors.

Pat Cummins and Nathan Lyon picked three wickets each. Australia scored 267 in response courtesy of a 76 runs knocks from Marcus Harris. James Anderson was the pick of the bowlers with four wickets from 33 runs.

During Australia’s innings a stunning attempt to go for a  diving catch and became one of the highlights of the innings. The incident happened in an over by Mark Wood when Mitchell Starc was playing on a score of 9 runs from 19 balls.

The Australian team’s score was 245/8 and Mitchell Starc attempted a shot over the head of mid-on where the English pacer, James Anderson was standing. Anderson dived towards his right in an attempt to take a stunner but the ball rolled away after hitting his hands.

Here is the video of the brilliant effort from James Anderson:

Anderson flies … but drops what might have been a classic #Ashes pic.twitter.com/mDuErCZYug

what an effort by Jimmy Anderson!!! pic.twitter.com/cjfBkcez0r 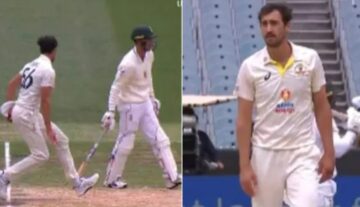