The funny New Zealand all-rounder James Neesham seem quite impressed with the way Indian cricketers posed for a picture flaunting their ‘six-pack’ abs. Leg spinner Yuzvendra Chahal recently posted the picture with his teammates after the workout on Instagram.

In the photo, Chahal can be seen posing alongside Navdeep Saini, Shreyas Iyer, Shikhar Dhawan, and Manish Pandey. The picture has gone viral on social media, and Neesham on Friday responded to one such tweet. The gif was a reaction of Hollywood actor Jonah Hill. Fans found Neesham’s tweet hilarious. Here is Neesham’s tweet:

The Kiwi all-rounder always comes up with savage replies and witty one-liners on Twitter, which keep fans on their feet.

WATCH – Glenn Maxwell Got Out With A Bizarre Scoop Shot

Recently, India After suffering a humiliating loss by 10-wicket in the first ODI in Mumbai, Team India made a strong comeback in the Rajkot by defeating the Australian team by 36 runs and leveled the three-match series by 1-1. Coming in to bat at his usual batting position of No. 3 after the dismissal of Rohit Sharma, the Indian skipper, Virat Kohli scored his 56th ODI half-century amidst a 103-run second-wicket partnership.

ALSO READ: Injuries To Rohit Sharma And Shikhar Dhawan Can Be A Trouble For India

Despite individual half-centuries from Dhawan and Kohli, it was wicket-keeper batsman KL Rahul’s 80 (52) with the help of six fours and three sixes which powered the hosts to 340/6 in 50 overs. Chasing 341, Australia had a sluggish start, but they were bowled out for 304 in the pursuit of 341 in the final over of the innings. The series is nicely set up for a blockbuster of a decider at the Chinnaswamy Stadium in Bangalore on Sunday.

Recently, a fan had asked Neesham how can one pick out-swinger or in-swinger. To which, Jimmy replied it depends on how you got dismissed: “If you nick off it’s outswing, if you get bowled it’s inswing.”

If you nick off it’s outswing, if you get bowled it’s inswing. https://t.co/H7fBpfwY3S

On the work front, Neesham has been picked in New Zealand A side to face India A in three unofficial ODIs, starting January 22. 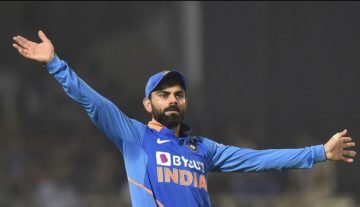