YouTuber Daniel Jarvis as known as ‘Jarvo69’, who has stolen the limelight in recent times by breaching the security and entered the crease during the last Test match at Lord’s and the ongoing Headingley game, will be banned for life because of this, English county sources shared on Saturday. 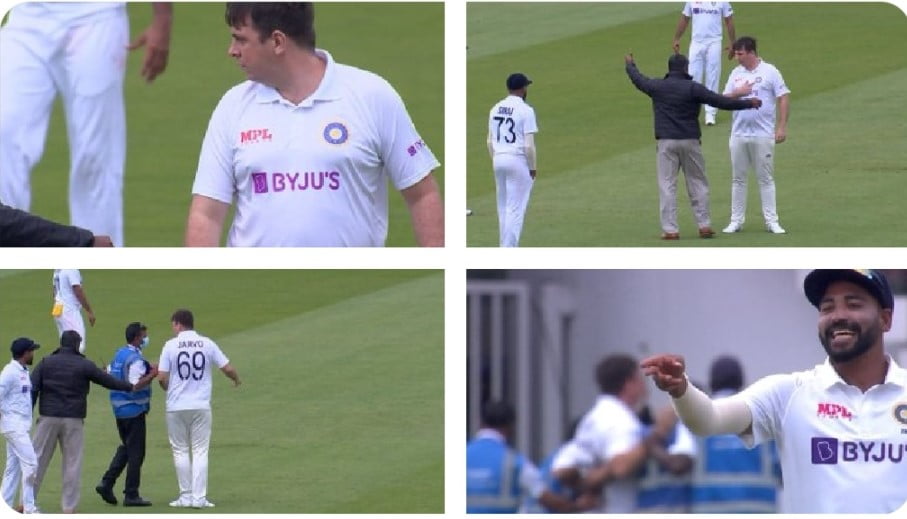 Jarvo, who was seen in the India whites, has made headlines because of his two intrusions but the Yorkshire County Cricket Club didn’t take it well and they are treating this as a case of security breach and he won’t be allowed in the Leeds Gallery in the future as well.

“Yes, Daniel Jarvis will be banned from Headingley for life. We will also be imposing a financial penalty,” a Yorkshire CCC spokesperson told PTI when he was asked how the county deals with this kind of intruder. “As on previous days, there will be stewards present around there to stop anyone that attempts to get on.”

Notably, on Friday, he came out as a batsman with all his cricketing gear and managed to reach the crease as well before the security took him off the field. This happened after Rohit Sharma’s dismissal who got out after scoring 59 off 156. He stitched 82 runs for the 2nd wicket with Cheteshwar Pujara, who has scored his first half-century in this tour. Notably, India had posted only 78 runs in their first innings.

R Ashwin also reacted to the incident after the day’s play, he tweeted, “Today’s play was as good as it can get with @[email protected]@imVkohli and Jaarvo showing great intent and grit!🤩😂😂 Keep going fellas and stop doing this Jaarvo. #IndvsEng”.

Today’s play was as good as it can get with @ImRo45 @cheteshwar1 @imVkohli and Jaarvo showing great intent and grit!🤩😂😂 Keep going fellas and stop doing this Jaarvo. #IndvsEng

Meanwhile, former England captain Michael Vaughan was unimpressed with Team India’s decision to start Day 2 of the third Test against England with the speedster Ishant Sharma. However, India had to take wickets in the first hour of play and Vaughan was surprised to see that as Ishant failed to make a mark as well.

Ishant Sharma has had a poor start at Headingley. He has conceded over four runs per over and failed to maintain proper line and length a swell. Michael Vaughan also stated that Virat Kohli will have to answer for his strange tactics.

“You are looking at the start of the day’s play. Ishant Sharma was by far the worst Indian seamer yesterday. You start with him the next day, in an hour that you have to win, you (should) surely go to your best bowler, Jasprit Bumrah. Shami didn’t take the new ball yesterday for whatever reason. And Virat will have to answer it and he will have to answer it quite heavily,” Michael Vaughan said on Test Match Special podcast.