All cricketing activities are stopped amidst the outbreak of the CoronaVirus Pandemic across the globe. Many cricketers and coaches have kept themselves busy by giving interviews via video conference in the lockdown.  Former Australian fast bowler Jason Gillespie shares his opinion on the current Australian bowling attack. The Aussie pacer turned coach terming his country’s bowling attack as the best in the world.

Jason Gillespie has good reasons to term Australi’s bowling attack the best as their pace battery ranks amongst the elite players in the ICC rankings. Pat Cummins, Mitchell Starc, and Josh Hazlewood are all ranked amongst the 10 best ICC bowlers in the longest format of the game.

Three of the four frontline Australia bowlers are in the top-10 rankings of Test cricket.

Australia’s Pat Cummins sits at the top of ICC’s rankings of best bowlers in Test Cricket. He is followed by Mitchell Starc who claims the sixth spot while Josh Hazlewood is the last name amongst the top 10.

Answering a query on Sky Sports’ Cricket Podcast, the former Aussie pacer said, “It would be hard to argue with that.” The Sussex head coach spoke how Aussie’s Starc and Hazlewood has the potential of becoming the greatest new-ball bowling pair in the team’s history.

ALSO READ: Ravichandran Ashwin Opens up About his Future in Red-Ball Cricket

“I have been saying for a couple of years that Starc and Hazlewood are potentially going to be our greatest opening combination. They compliment each other so well. You have the left-arm attacking option of Starc, who can go for a few runs but is a wicket-taker and creates indecision with his pace. Hazlewood is a wonderful bowler – I could watch him bowl all day.” the cricketer-turned-coach said.

Gillespie also praised the depth of availability in Australia’s bowling pool. Speaking on talent at Australia’s disposal, the 45-year-old says, “Cummins can fulfill any number of roles. Be it with the old ball, or with the new ball. Those three are backed up by Lyon, who has been brilliant. I think the depth is there as well. James Pattinson also has a role to play for the next couple of years. Michael Neser has been in the wings for 18 months and there is the young lad in Jhye Richardson. We have the makings of a fine bowling attack.”

Jason Gillespie feels this current crop is amongst the best in Australian history. “In time, when we look back and talk about the best Australia bowlers, Australia has ever produced, a number of these names will be in those conversations,” he said. 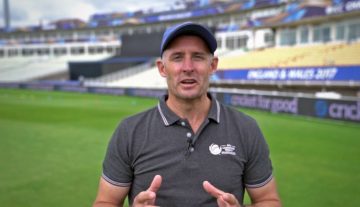