Bowlers are one of the most expressive characters on a cricketing field and don’t hesitate to celebrate a batter’s wicket in fine form. The West Indies all-rounder, Jason Holder ended Shreyas Iyer’s carnage by dismissing him caught and bowled after scoring a half-century and celebrating the wicket with one of his dance moves.

However, a soft dismissal against Jason Holder sent him back to the pavilion and the lanky pacer celebrated the wicket in a unique way. Holder was bowling the 13th over of the innings and he bowled a widish full toss to the batter.

Shreyas was looking to slog the last ball of the over across the line but drilled straight to Jason Holder and the latter made no mistake in grabbing the opportunity. Holder then expressed his joy with an antique dance celebration and it was appreciated by the fans at the venue as well.

Here is the video of the unique celebration from Jason Holder; 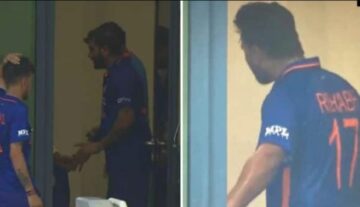 Twitter Reaction
By CricShots - Sep 4, 2022
Rohit Sharma Was Unhappy With Pant And Hardik After Their Dismissals