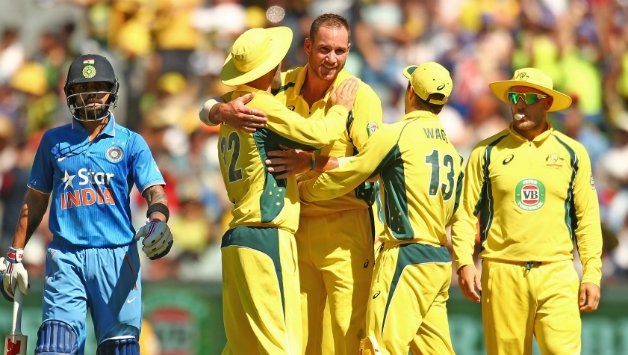 In the early 2000s, Australia’s one of the most underrated bowlers Jason Gillespie troubled a lot of Indian batsmen during their tour to India.

Gillespie was also the former assistant coach of the Australian side and he reckons that the current Aussies has the ability to halt Team India’s dream run in ODIs.

In an exclusive interview to TOI, Jason warned the Australian team to avoid any verbal battles or “staring competitions” with India skipper Virat Kohli rather they should just get him out with “disciplined” bowling.

Talking about Australia’s failure in Indian sub-continent in recent times, Gillespie said, “Australians can’t say that they are not used to the conditions. I think what has to be said is that India is an amazing 50-over side. At home, India is almost unbeatable. It’s a tough task for any side. It’s going to be a closely-fought series. I feel Australia will win 3-2.”

When asked about the ideal plan against Virat, Jason replied, “I don’t think Australia needs to get into a verbal battle or get into staring competitions with Kohli. The best way to put him under pressure is through disciplined bowling. I would like to see the Aussie quicks bowl bouncers throat-high to get him on the back foot, make him think about it. The follow-up ball remains the key. Make him come forward inviting the drive. If there is movement off the wicket or in the air, then the edge comes into play. Maybe they can bowl on the stumps with two catchers on the on-side. It’s about getting him out of his comfort zone.”

Comparing the bowling attacks of the both the teams, Jason said, “The Indian attack has the edge. The Indian seamers, [Mohammad] Shami, [Umesh] Yadav, Bhuvneshwar [Kumar], Jasprit Bumrah, adapt well to the surfaces in India. It appears to me that they have clear plans and are embracing the challenge of bowling on flat surfaces. I’m sure the Aussies too will go in with similar attitude and they will not think that they will be belted around. Attitude is everything with regards to bowling in Indian conditions.”

Gillespie concluded by asserting that Adam Zampa will play a crucial in the upcoming series as his record in ODI has been outstanding. Jason also said that Zampa should always be present in Australia’s playing XI.