The premier Indian fast bowler, Jasprit Bumrah is looking to break Kapil Dev’s record for the fastest Indian fast bowler to surpass the tally of 100 Test wickets. Bumrah has scalped 95 wickets from 22 matches while Kapil Dev had achieved the feat in the 25 Tests. Bumrah will also become the 23rd Indian bowler to surpass the tally of 100 Test wickets. He will back himself to reach the feat when India and England meet in Headingley from Wednesday for the 3rd Test of the ongoing 5-match series.

Jasprit Bumrah will also be going past Venkatesh Prasad and Manoj Prabhakar both of whom finished their Test careers with 96 wickets. Bumrah, who made his Test debut as recently as 2018, has made rapid strides in the longest format of the game as he has picked 95 wickets at a miserly average of 22.62.

Meanwhile, England skipper,  Joe Root is eyeing a major landmark as he needs one more century to become the batsman with the most tons in England and India encounters.  Root is currently tied with the likes of Rahul Dravid, Sachin Tendulkar, and Alastair Cook with 7 centuries each.

However, there are plenty of concerns for Joe Root, the captain as England is lost the Lord’s Test from a position of strength. England has been hit by injury concerns as Mark Wood and they had to include T20I specialist Dawid Malan to bolster their top-order that has consistently failed in the series.

Meanwhile, India will be high on confidence and they have recent history in their favor at Headingley in Leeds. India has played 6 Tests at the iconic venue and has won 2 while losing 3. However, India their last loss came in 1979. Their last two victories have been emphatic and demoralizing for England.

Incidentally, India posted a mammoth total of 628 for 8 declared at Headingley in 2002 with Sachin Tendulkar, Rahul Dravid, and Sourav Ganguly hitting a century each. 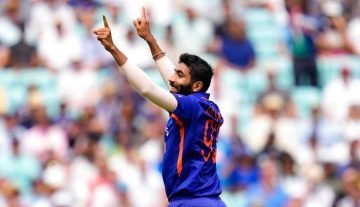 News
By CricShots - Oct 6, 2022
Jasprit Bumrah Gives A Stern Reply To The Critics After The Injury