The English skipper, Joe Root celebrated his 100th Test with his third successive Test ton in 2021 as England took control on the first day of the first Test against India at Chennai’s MA Chidambaram Stadium on Friday. Ironically, he became only the fifth captain to hit a century in his 100th Test match thus joining the illustrious list comprising the likes of Colin Cowdrey, Inzamam ul Haq, Ricky Ponting(2), and Graeme Smith.

Root had made his debut against India in the 2012-13 tour and also played his 50th Test against the Indian team in Vishakapatnam in 2016. Root received a cap from team-mate Ben Stokes for witnessing the landmark of playing in his 100th Test in the first match of the series against India. Root is also only the 3rd England player after Colin Cowdrey & Alec Stewart to score a ton in their 100th Test.

England nearly wasted a strong start, losing two quick wickets in the morning session, but Dominic Sibley and Root gave nothing away to the Indian bowlers India after lunch with their unbroken 200-run stand at Chennai’s MA Chidambaram Stadium.

Sibley was batting on 67, with the help of nine boundaries as Root – after surviving a close run-out chance early during his knock and having smashed a double century and a century in his previous two-match Test series in Sri Lanka – scored his 20th Test hundred.

Earlier, Root won the toss and elected to bat, avoiding the potentially difficult task of batting in the fourth innings on a pitch similar to a dust bowl.

Rory Burns and Sibley made a steady start with a 63-run opening partnership before R Ashwin managed to get a wicket of to Burns for 33 who fell while attempting a reckless reverse-sweep. Dan Lawrence joined him soon after in the pavilion, trapped lbw by Jasprit Bumrah without scoring.

ALSO READ: Virat Kohli Excited for The Come Back Of Fans To Watch Cricket

Here are some of the congratulatory messages for Joe Root on Twitter:

Jasprit Bumrah breaks the solid 200-run stand between Dom Sibley and Joe Root, and it's stumps in Chennai!

There is no doubt that Joe Root has once again re-established himself as one of the pre-eminent batsmen of the modern game. Understandable that some felt he never left that small core group. 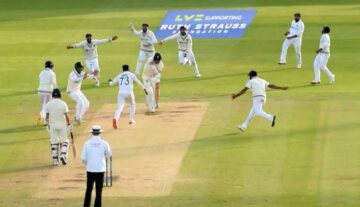