England players might have played right into the hands of the Australian ream in the first innings but that wasn’t the case in the second innings. The visitors made a stellar comeback in the second innings. Earlier, Aussies bundled out England for a meager score of147 in the first innings. Australia’s Test captain Pat Cummins ripped through the defense of the English batsmen. He went on to take his sixth five-wicket haul in Test cricket.

In reply, Australia switched to the next gear in terms of scoring runs in the first innings. Travis Head remained unbeaten on 112 at the end of Day 2 and Australia was at 347/7.on Day 2. England fast bowlers Mark Wood and Ollie Robinson accounted for 3 dismissals apiece and Australia was bundled out for 425 on the third day.

While we thought that England would succumb to Australia’s pressure in the second innings, the visitors fought a good fight. Despite losing openers – Rory Burns and Haseeb Hameed early on, England stood firm against the Aussies. Mitchell Starc and Pat Cummins provided a terrific start as they dismissed England openers.

After that, Joe Root and Dawid Malan played with passion, grit, and determination. They held their nerves and batted with gumption against the hungry Australian fast bowlers. Both the batsmen went on to score a fifty apiece. The best part was when Joe Root played an immaculate cover drive off Mitchell Starc’s bowling. The incident happened when Root was batting on 27 runs.

Wake up to a Rooty cover drive 😍#Ashes pic.twitter.com/MTcf0aZXmI

The cover drive oozed class as the ball raced towards the boundary line. The commentators ran short of words to describe Joe Root’s cover drive. Root grew from strength to strength and went about his business. Joe Root and Dawid Malan constructed a 159-run partnership for the third wicket and England responded pretty well with 220/2 (70 overs) at the end of Day 3.

ALSO READ: Ravi Shastri Reveals There Were People Who Wanted Him Not Becoming India Coach

England Test captain slammed as many as 10 fours to his name whereas Malan also hit 10 boundaries. The visitors are in a rock-solid position and they need to dictate terms on the fourth day to stay alive. England still trails by 58 runs. 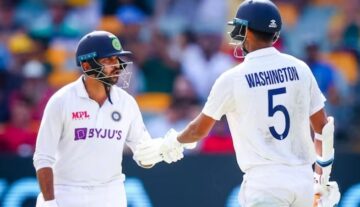 On This Day
By CricShots - Jan 17, 2023
On This Day: Shardul Thakur and Washington Sundar Played Special Knocks