The Fiery English Jofra Archer has always been funnily been considered a prophet following his tweets from years ago, dug up by fans, which seemed to predict certain events correctly in cricket. Following the invasion of Russia in Ukraine, a tweet by Archer in 2014 resurfaced wherein he tweeted “Come on russia!” in 2014, probably predicting the battle.

According to the latest reports, Russia has already destroyed the airbases and air defenses of Ukraine. However, Jofra Archer is expected to have tweeted the above one when Russia invaded Cremia in 2014, Which was an autonomous part of Ukraine but invaded by Russia and by fake referendum they managed to get it into Russia”.

The fiery English fast bowler, Jofra Archer was brought by the five-time champions Mumbai Indians (MI) for INR ₹8 crores, four times his base price of ₹2 crores, on the second day of the IPL 2022 mega auction. As soon as the pacer’s name came in the Indian Premier League (IPL) 2022 mega-auction, it seemed like MI had already decided to buy the services of Archer had a set plan to acquire the services of the 26-year-old and bid for him at his base price.

ALSO READ: IPL 2022 To Have Two Pools, Final To Be Played Last Week On May

However, Archer’s former franchise, Rajasthan Royals (RR) were not in the mood of letting go of the fast bowler and wanted to get him back. They bid for him intensely but unfortunately had to withdraw due to their purse restrictions.

When Rajasthan left the bid at₹ 6.50 Crores and Archer almost with Mumbai, Sunrisers Hyderabad entered the bidding war. After a long bidding battle, Archer was brought by Mumbai for INR 8 crore.

ALSO READ: Sunil Gavaskar Feels Jasprit Burmah Can Be The First Name On Any Team Sheet

Since the last year, Jofra Archer has not been taking part in competitive cricket and his absence will stretch a bit more after it was decided the recurring stress fracture in his right elbow needed another operation. Archer will not be available for this season of the IPL 2022 but will play from the next season onwards. 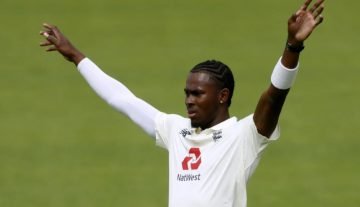