With no cricket going on, all the cricketers have a lot of free time on their hands right now. Many cricketers have also been proactive on their social media in the past few weeks due to the lockdown. England fast-bowler Jofra Archer participated in the Royals Podcast episode with his IPL franchise and spoke with his former Rajasthan Royals teammate Ish Sodhi.

Rajasthan Royals took to Twitter and shared a clip of the conversation between Jofra Archer and Ish Sodhi. In the clip, Jofra Archer names India’s opening batsman KL Rahul is the toughest batsman he has bowled to in T20 cricket.

“Obviously, KL Rahul. He has got me a couple of times when we played Kings XI Punjab. So, I would definitely go with him. I cannot really put my finger on another one. It’s just him who has probably got the better of me most of the time,” Archer said to Sodhi.

Consistent performances in IPL and with the national team helped KL Rahul earn the captaincy role for Kings XI Punjab. KL Rahul was named captain of the Punjab-based franchise team after the player auction in December last year.

If not for coronavirus pandemic, KL Rahul would be busy leading Kings XI Punjab in IPL right now. However, the Board of Control for Cricket in India has postponed the 13th edition of the tournament indefinitely due to the same. 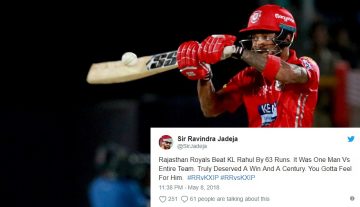