One of the major developments from the Caribbean suggests that the West Indies opening batter John Campbell has received a four-year ban by Jamaica Anti-Doping Commission (JADCO) for violation of an anti-doping rule, according to sources in Jamaica. The ruling was made by an 18-page decision, which accused the player either of evading, refusing, or failing to submit the sample collection concerning his anti-doping violation.

The commission accused John Campbell of refusing to provide a blood sample at his home in Kingston after he was suspected of doping. The panel decided to Campbell a four-year ban after he failed to produce any evidence in his defense, finding his anti-doping violation intentional. The ban was backdated to start from notification of the violation on May 10 this year.

The official decision read: “The panel is persuaded to a comfortable degree of satisfaction that the athlete committed an anti-doping rule violation, namely breach of JADCO rule 2.3. The panel does not find, on the evidence presented, that the athlete’s anti-doping violation was not intentional.”

West Indies batsman John Campbell has been slapped with a 4 year ban for "evading, refusing or failing to submit to sample collection by JADCO on April 20, 2022.
The decision, a copy seen by TVJ Sports, came Friday evening from the Independent Anti-Doping
Disciplinary Panel. pic.twitter.com/z8bkWMFGXf

“In the circumstances of this case the athlete is ineligible for a period of 4 years,” it added, citing the applicable JADCO rule 10.3.1.

John Campbell, born and bred in Kingston, made his international debut for the Windies in 2019, representing the Caribbean team in a Test match against England. He made his limited-overs debut the following month against the same opposition, in fact, his T20I debut also came in the same white-ball tour of England.

The aggressive southpaw went on to feature in 20 Tests, scoring 888 runs with three half-centuries to his name. He had a more prolific outing in the 50-over format of the game as he had amassed 248 runs in just five innings at an impressive average of 49.60, with an explosive knock of 179 off just 137 deliveries against Ireland. He was recently seen in action for the Guyana Amazon Warriors in the first edition of The 6IXTY. 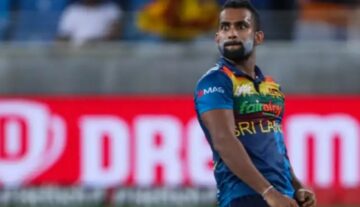