After the completion of the limited-overs series, the hosts England and visitors India will face for the five-match Test series, starting from August 1. Prior to that lengthy series, the in-form English wicketkeeper-batsman Jos Buttler has claimed that the IPL friendship will be forgotten on the field.

Buttler, who started his IPL career for Mumbai Indians (2016-2017) in 2016, played for Rajasthan Royals in the IPL 2018. While Hardik Pandya was his former IPL teammate, Ajinkya Rahane was his Rajasthan Royals teammate in the last IPL, who also served as the captain of the team.

He said on this, “There are a few guys I have played with. Naturally you have friendships with them but on the field they seem to be forgotten and everyone is competitive.

“There are familiar faces, guys you know a bit more about than just the cricket. That is one of the great things about world cricket now. You get these opportunities to play around the world and meet these great people. There is a lot more familiarity between the sides than there ever has been before.”

Buttler further added that their conversation with the IPL teammates may happen off the field but they will forget this friendship on the field.

Talking about that, the 27-year-old said, “Not on the pitch but maybe on the training days and around the lunch room. Moeen played with Virat at RCB and [Yuzvendra] Chahal. I saw them getting on quite well. I have played with Hardik Pandya at Mumbai so you are open to having a chat.

“I am sure there will be moments in the Test series, especially on the field, when those things look like they have been forgotten. It will be highly competitive. What you have to remember is people can get on well but the reason guys have got to international sport is they want to win and are competitive so it will be no different on the field. Off it maybe a little bit.”

From the IPL 2018, Buttler is in the dangerous form in batting. In IPL 2018, Buttler scored 548 runs in 13 innings with the average of 54.80 and strike-rate of 155.24. He scored five half-centuries in that tournament including the highest knock of 95* against Chennai Super Kings (CSK).

Talking about his current dangerous batting form, Buttler said that he has learnt this from the great players, including in the IPL.

The English cricket said, “[They] make less mistakes under pressure. They seem to make the right decision a lot of the time. That is a skill. The hunger to do it day in day out at training, in the matches whether they have had successful matches the day before or not. That hunger really shines through in those top players. As well there’s Kumar Sangakkara, watching him play in county cricket, that desire and want to be the man to win the game for his team every day shines through in these players.

“The biggest thing I have learned from the IPL, it is obvious what the best players do and why they are the best players and stand-outs. They just have a different mentality, a winning mentality in every game and the consistency to do that.

“I feel like I have learned a hell of lot from watching guys train and go about their practice, ways they react to certain pressure moments in a game as well. Someone like Virat Kohli is an immensely talented guy but also watching him go about it you see that mentality of getting to the top, likewise with other players [like] David Warner and Steve Smith,” said Buttler.

After making his Test debut in July 2014 against India at Southampton, Buttler has played 20 Tests where he has scored 945 runs with the average of 35.00. Buttler has scored eight Test half-centuries but still hasn’t scored a Test century which he wants to achieve in the upcoming Test series against India.

Buttler said, “I would love to achieve that feat. It is nice to think it has been four years since I made my debut. I have good memories against India but, like I said before I played against Pakistan, it is about reinforcing the enjoyment factor and the incredible opportunity it is to play Test cricket. For those two games I was not sure how it would go but I approached them in a great manner and it is important for me to do that going into this series.” 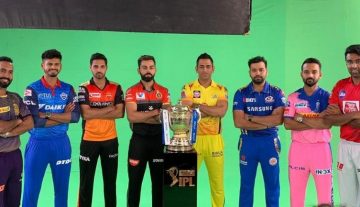 News
By CricShots - Mar 31, 2020
Coronavirus Outbreak: No Pay For Players If IPL Gets Cancelled?