Playing their second match of the Indian Premier League (IPL) 2021 at the Arun Jaitley Rajasthan Royals (RR) came up with an improved all-round performance against SunRisers Hyderabad (SRH). A lot of credit for the 55-run win goes to Jos Buttler for amassing a scintillating hundred which was also his first in the history of IPL on Sunday. Rajasthan rode on superb bowling performances from Mustafizur Rahman (3/20) and Chris Morris (3/29) to restrict Hyderabad to 165 for 8 on Sunday.

Chasing a record total of 221 runs to win the game, Hyderabad got off to a superb start as Manish Pandey and Jonny Bairstow added 57 runs for the first wicket in just 6.1 overs before Mustafizur Rahman cleaned up Pandey on 31. Bairstow was the next to depart as Rahul Tewatia was the one who dismissed him.

Kane Williamson’s first outing as SRH skipper in IPL 2021 was far from impressive as he played a below-average knock of a 21-ball 20 before Kartik Tyagi removed him. Chris Morris returned with excellent figures of 3/20 as he got the wicket of Vijay Shankar (8), Kedar Jadhav (19) and Abdul Samad (10) to derail Rajasthan Royals’ chase.

Earlier, opener Jos Buttler had smashed his maiden IPL hundred to power Rajasthan Royals to 220 for 3 against Sunrisers Hyderabad. Put into bat, Buttler (124 off 64 balls) and skipper Sanju Samson, who smashed 48 off 33 balls, stitched a brilliant partnership of 150 runs after the Royals lost opener Yashasvi Jaiswal (12) cheaply. Jaiswal smashed three fours before the Afghan showed his class and trapped the youngster in front of the stumps.

WATCH – Khaleel Ahmed Gets Trolled For His Pathetic Fielding Effort

Vijay Shankar managed to go the wicket of Samson in the 17th over owing to a brilliant boundary catch of Riyan Parag. However, there was no stopping Buttler, who was in complete control, as he continued to smash boundaries in regular intervals. Sandeep Sharma eventually brought his innings to an end of the penultimate over.

Here is how Twitter reacted to RR’s comprehensive win:

@Mustafiz90 back to looking his best – so nice to see 💪#SRHvsRR

Jos wasn’t timing the ball all that well for the first 40-45 runs….and still he went on to hit 124. 🙇‍♂️ One of the cleanest strikers of the cricket ball. #JosTheBoss #RR #RRvSRH

The hunger of youngsters in #RR should be talked more, Today Anuj Rawat made his debut, took 3 great catches. This is where #RR the team has been more kind, finding & backing young talents and giving opportunity to them.

After Sandeep Sharma bowled his first ball of the over @BrettLee_58 said he's very close to overstepping, after 2 balls he goes on to bowl a no ball😭 Yesterday he said csk were 20 runs short and now the no ball.. He's just too good🔥🔥 #Selectdugout

It took him 282 games but FINALLY, Jos Buttler, today in Delhi, ended up scoring his maiden T20 century. But as good as his innings was, what was arguably better was Buttler’s celebration. The England vice-captain adopted teammate Riyan Parag’s ‘selfie’ celebration to mark the special occasion.

Riyan Parag’s effect is too high 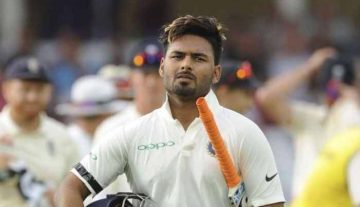