New Zealand skipper, Kane Williamson is one of the most popular cricketers around the world. He has especially been brilliant in recent years and his numbers are nothing short of exceptional. Owing to the same, the Kiwis have been doing well in recent times. In fact, New Zealand is the only team to have qualified for the finals in the last three ICC events – 2021 T20 World Cup, the inaugural World Test Championship, and the 2019 World Cup.

Notably, Kane Williamson is known for his calm and gentle behavior which makes him a great ambassador of sportsmanship. However, the veteran batter also has a pretty good sense of humor. That was evident in his recent interaction with Indian actor Manoj Bajpayee, who proved his mettle once again in the popular web series titled – The Family Man.

ALSO READ: Rajkumar Sharma Feels Virat Kohli Has A Lot Of Clarity About His Captaincy

During the special interaction for Amazon Prime Video, Manoj Bajpayee was seen having an interaction that quizzed Williamson with various cheeky questions that left fans in splits. While Bajpayee tried to pull the cricketer’s leg several times, the Kiwi skipper had the ultimate laugh. Williamson hyped his answer in such a way that made Bajpayee he’s talking about The Family Man.

However, Kane Williamson stumped the actor by picking Pankaj Tripathi-starrer Mirzapur. In the response, Williamson said, “Well, I think you know my favorite show and I have seen the first two seasons. Can’t wait for the third to come out – Mirzapur!” Bajpayee was left puzzled by Williamson’s answer as he ended the interaction saying, “By Kane.”

For the unversed, popular OTT platform Amazon Prime Video, which streamed both Mirzapur and The Family Man, has bagged streaming rights for the forthcoming series between India and New Zealand which will be taking place next year.

Meanwhile, Williamson has last seen during the Test series against India which the Virat Kohli-led side won 1-0. The New Zealand batter led his troop in the first Test which resulted in a draw. However, Williamson had to give the second game a miss due to an injury. India won their affair by 372 runs and walked away with the series triumph. 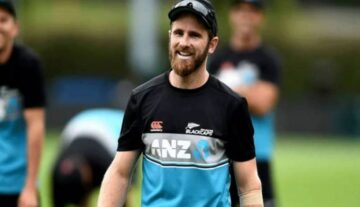