Playing cricket at the international level remains the ultimate dream for all aspiring players. With the viewership of cricket increasing by the day, the margin of error for cricketers begins to lessen, adding more pressure on cricketers with social media being the platform where players are often targetted. And these come amid the constant need to maintain consistency with the presence of competition within the team and also with cricket calendars getting tighter by the day.

Players hence have often complained about the pressure of playing cricket at the highest level. Legendary India captain Kapil Dev on Sunday made a statement on the very same, but fans were left angered as they felt that the former cricketer was rather mocking mental health.

ALSO READ: Shreyas Iyer Explains His Celebration After The Century In Ranchi

Speaking at the ‘Chat with Champions’ event, Kapil Dev acknowledged that he never understood words like “pressure” and “depression”, mocking them as “American words” and opined that if cricketers feel there is pressure in playing IPL, then they should rather opt out. He then added that even students of classes 10 and 12 nowadays feel the “pressure”, which again, he acknowledged that he never found logic in it.

In the event, Kapil Dev was heard saying, “I hear a lot of times on TV that there’s a lot of pressure on players to play in the IPL. Then I only say one thing, don’t play. If a player has passion, there will be no pressure. I can’t understand these American terms, like depression. I’m a farmer and we play because we enjoy the game, and there can’t be any pressure while enjoying the game.”

ALSO READ: Ishan Kishan Had A Foodie Conversation With A Fan In Ranchi

He further added, “I remember going to a school where students of class 10 and 12 told him they face lot of pressure. I said, ‘So also face pressure!’. You people sit in air-conditioned rooms with fees paid by your parents, teachers cannot beat you up, then were is this pressure coming from? Ask me what pressure is all about. Teachers used to beat us up and then would ask where we had gone. Students need to convert this into pleasure and fun, pressure is a very wrong word.”

Here is the video of the comments from Kapil Dev:

Here is how the netizens reacted to the comments from Kapil Dev:

Daily reminder that rigorous EQ/IQ tests should be mandatory before letting people speak in public about experiences outside their mental cocoon.

Kapil Dev has a cupboard filled with silverware, but I wish he had a mind without as much rust. https://t.co/aXaYlVIqGB

Really disappointed to see Kapil Dev mock mental health. He thinks“depression” is an American word & today’s kids have no basis to feel any “pressure” because “they study in AC classrooms.” 🤷‍♀️ https://t.co/dekFh6lrAj

I don't understand something and therefore it doesn't exist.

Nothing just an old guy making fun of mental health

This is yet again childish and immature from Kapil Dev..🤦‍♂️🤦‍♂️

If you don't know what's Pressure, Depression and Anxiety, stfu and don't behave like an absolute boor ffs…!! 😭😭👋 https://t.co/JIVV6OjcVt

Kapil Dev says it and the audience starts cheering, this says a lot about the society we live in https://t.co/cLhOffXrrq

Kapil Dev is speaking nonsense about mental health at an event sponsored by coaching classes, which themselves excel at exploiting anxieties of students & risking their mental health. Those clapping should not only be ashamed, they should be banned from ever entering a classroom. https://t.co/WSWpo7HsRI 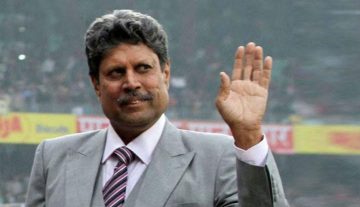