While chasing a target of 186 against the Rajasthan Royals (RR), under the captaincy of KL Rahul, Punjab Kings needed just 10 runs off the last 15 balls with the equation coming down to 4 from 6 balls with 8 wickets in hand. However, RR managed to win the game by defending 4 runs successfully owing to pinpoint yorkers of Kartik Tyagi, who took the team over the line as he showed tremendous composure to give away just 1 run and pick up 2 wickets in the last over.

Kartik Tyagi nailed his yorkers and managed to take the wickets of Nicholas Pooran and Deepak Hooda as Punjab failed to score not able to score 3 runs from their last 3 deliveries. The youngster’s performance pushed ace pacer Jasprit Bumrah to pour some words of appreciation. As Tyagi received a man of teh match award for defending just four runs in the last over , Bumrah stepped in to laud him.

ALSO READ: KL Rahul Feels The Loss Against RR Is A Hard One To Swallow

Praising the youngster, Jasprit Bumrah had tweeted, “What an over, #KartikTyagi! To maintain a cool head under that kind of pressure and to get the job done, great stuff, very impressive! #PBKSvRR #IPL2021.”

Kartik Tyagi, who was way impressed by the pacer’s gesture went on to add that Bumrah is his hero and these words definitely mean a lot to him. He replied, “It feels so great to get appreciation from my hero.”

It feels so great to get appreciation from my hero 😊 https://t.co/R4ZhCLRKc4

Talking about the match, the Royals pulled off a great batting performance to reach a total of 185 runs on the board. However, innings from Punjab openers KL Rahul (49 off 33) and Mayank Agarwal (67 off 43) gave the much-needed start to the team. However, as the caravan went forward, what happened towards the end can only be explained by Rahul and his men.

While they needed just eight runs in the last couple of overs, probably fans got to see the biggest choke and they lost the game by two runs wherein young Tyagi turned out to be the perfect hero. 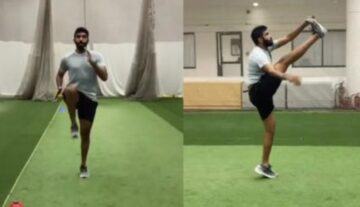