Currently, Australia and South Africa are locking horns with each other in the first match of the super-12 stage of the ongoing T20 World Cup 2021 in Abu Dhabi. After winning, the toss, the Australian skipper, Aaron Finch asked teh Proteas to bat first and os bowlers didn’t disappoint as South Africa was three down in the powerplay itself, however, then Aiden Markram made a partnership with Henrich Klassen for the 4th wicket, but the latter lost his wicket in the eight over.

After Klassen’s dismissal, Markram started building a partnership with David Miller for the 5th wicket but Miller also got out in the 14th over which was followed by the wicket of Dwaine Pretorius in the same over, Keshav Maharaj joined Markam in the middle but he also got out in teh next over after a terrible mixup.

On the third ball of the over 15th over, Markran stabbed the ball towards point, but the fielder caught it and failed to hit teh sumps at the non-striker’s end. Maharaj wanted to run on the overthrow but Markram’s got his back turned on him as he was stretching to get back from the previous throw. Maharaj has hared down halfway on the pitch and then slips as he looks to turn back.

The throw is very wide at the striker’s end but Maharaj’s recovery time means Wade can hold it to his right, turn to his left and take aim, before diving to the stumps to break them well before Keshav Maharaj can come close, eventually he had to go back to the pavilion. 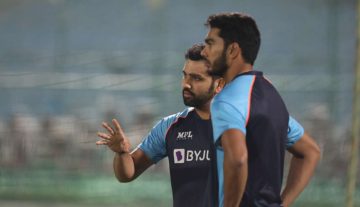