The Indian opener, KL Rahul has been going through a purple patch in the last couple of months. He has certainly emerged as one of the biggest positives for Virat Kohli and his men. Rahul is the part of the Indian squad that is currently involved in a five-match T20I series against New Zealand. And he is on the verge of surpassing the record that no other Indian batsman has ever achieved in the shortest format of the game.

During the ODI series against Australia, Rahul was asked by the team management to keep wickets after Rishabh Pant suffered a concussion. However, the 29-year-old had made the most of the opportunity and has been doing more than a decent job behind the stumps for the Men in Blue during the ODI series.

The Indian team management was quite impressed with the way Rahul has handled the extra responsibility. So, they asked him to continue with the same in the ongoing T20I series against the Kiwis. Moreover, he lived up to everyone’s expectation as he muscled two back to back half-centuries in the first two matches for his team.

Rahul played a knock of 56 runs in the series opener followed by his 57* runs knock in the second match. Now, the 3rd T20I is scheduled to be played in Hamilton and if Rahul manages to score another fifty with his bat against Kiwi’s then he will become the first-ever Indian batsman to smash four back-to-back half-centuries in T20Is as he is level with Kohli with three back-to-back half-centuries.

Moreover, he will also surpass MS Dhoni in the list of most fifties scored by an Indian wicketkeeper-batsman. Currently, Rahul and Dhoni are on a level with two half-centuries.

On the other hand, Team India would be eager to take an unassailable lead against the hosts at Seddon Park. The visitors’ have already won two games in the ongoing five-match series and they have a golden opportunity to get their hands on the series by winning the upcoming game. 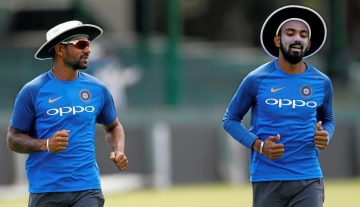 News
By CricShots - Jun 2, 2018
Indian Players To Face A Compulsory Yo-yo Test Ahead of Afghanistan Game