The newly appointed coach of Kings XI Punjab (KXIP), KL Rahul has had a challenging first game, where his team lost the game in the Super Over against Delhi Capitals (DC) on Sunday. In a humdinger of game, fortunes swayed along for both sides, with the early loss of wickets, and then some consolidation in the middle order, and then some dramatic collapses as well.

There are a few players from Karnataka in the KXIP squad, including Mayank Agarwal, Karun Nair, and Krishnappa Gowtham, and the abuse might have been directed towards any one of them.

Soon, the audio went viral, and the KXIP skipper was trolled by the RCB comedian Danish Sait on social media. On a photo that KL Rahul had posted referring to the match on Instagram, Danish Sait responded, ‘Mundhe baa…Golden words KL. Love you.’

KL Rahul’s Karnataka and Kings XI Punjab teammate Mayank Agarwal, who was the highest run-scorer in the match against DC – scoring 89 off 60 balls – and almost got the team home, replied to Danish Sait’s comments with the laughter emoticon.

The Punjab-based franchise will be locking horns with the Royal Challengers Bangalore (RCB), who beat SRH in their opening clash, on Thursday. Let’s hope that in this match Kings XI Punjab come out all guns blazing, and KL does not have to call out to his teammates in Kannada much. 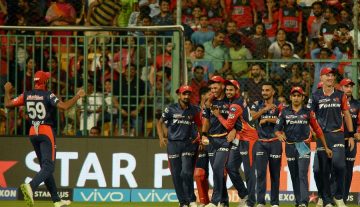