Delhi Capitals (DC) registered a crashing win over Kolkata Knight Riders (KKR) by 44 runs in the 19th match of IPL 2022 to register their second win of the season against the table-toppers after a great showing with both bat and ball. KKR bowlers were taken to the cleaners by the DC batters as they managed to post a huge score of 215 runs after batting first in the match. In the second innings, chainman bowler, Kuldeep Yadav was the pick of the bowlers for DC as he scalped 4 wickets.

Shreyas Iyer had won the toss and invited DC to bat first which Rishabh Pant and his team looked happy to do. DC openers Prithvi Shaw and David Warner got their team off to a flyer as they belted the KKR bowlers all around the park. Umesh Yadav who has bowled brilliantly in the tournament was also blunted by Shaw and Warner as they scored more than 65 runs in the powerplay.

Ajinkya Rahane and Venkatesh Iyer began the chase for KKR but faltered as both got dismissed in the powerplay itself by Khaleel Ahmed. Skipper Shreyas Iyer was looking solid as he started hitting the DC bowlers and scored 54 from 33 balls before being cleaned up by Kuldeep Yadav.

Kuldeep Yadav is having a great IPL so far and he took 4 wickets for 35 runs which helped Delhi Capitals put the brakes on Kolkata Knight Riders. Rishabh Pant rotated his bowlers well during the game which is a huge positive for the side as they prepare for the upcoming games.

Here is the video of the catch by Kul deep Yadav:

That roar from Kuldeep Yadav felt like the burden of three years being released.

Really hope #IPL2022 is the start of a turnaround for him. Young enough to still have a great career for India.

This game was all about –
• KULDEEP vs KKR
• SHREYAS vs DC 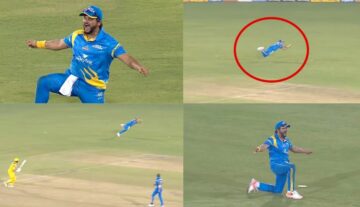