The Windies top-order batter, Kraigg Brathwaite was batting on 72 and he faced 184 deliveries out in the middle and was looking solid during the first innings of teh second Test against Sri Lanka. But then, the well-set Brathwaite was left hapless by an absolute peach of a delivery from left-arm spinner Lasith Embuldeniya. Embuldeniya came over the wicket and delivered the ball outside leg stump.

The ball took a sharp turn after pitching outside leg stump and Kraigg Brathwaite lunged forward to defend it. But then, the right-hander has beaten all ends up. The ball spun viciously past Brathwaite’s willow and crashed onto stumps, as the Sri Lankan players leaped up in joy.

How good was that? pic.twitter.com/9RJfIxXEXF

The West Indies were in the driver’s seat in the 2nd Test match against Sri Lanka. But a dramatic collapse saw the visiting team going down from 180/3 to 221/8. After choosing to bat first, the Sri Lankan side was bowled out for 204.

Apart from Pathum Nissanka and skipper Dimuth Karunaratne, who scored 73 and 42 respectively, not even a single Sri Lankan batter managed to surpass the  30-run mark. Veerasammy Permaul ran through the Sri Lankan batting lineup and picked up a five-wicket haul. Jomel Warrican chipped in with 4 wickets as well.

The hosts ate currently railing West Indies by 3 runs as they have lost 2 wickets at teh end of Day 3. Apart from Kraigg Brathwaite, who scored a patient 72, Jermaine Blackwood and Nkrumah Bonner contributed 44 and 35 respectively.

But then all the other batters put up an abysmal performance with the bat. Ramesh Mendis was the wreaker-in-chief with the ball and scalped a superb five-wicket haul. Sri Lanka currently leads the two-match series 1-0. The Dimuth Karunaratne led outfit decimated the West Indies side by 187 runs in the 1st rubber. 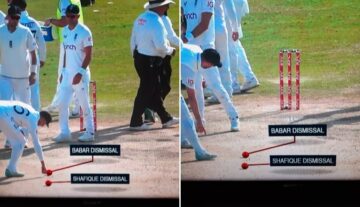