In a piece of terrible news, legendary Australian leg-spinner, Shane Warne has reportedly passed away of a suspected attack at the age of 52. Warne is widely regarded as one of the greatest bowlers to have played the game, having retired as Test cricket’s second-most prolific wicket-taker. Warne’s management company in a brief statement released on Friday confirmed that he has taken his taken hs last breath in Koh Samui, Thailand, of a suspected heart attack.

In the official statement, the management informed, “Shane was found unresponsive in his villa and despite the best efforts of medical staff, he could not be revived. The family requests privacy at this time and will provide further details in due course.”

ALSO READ: Virat Kohli Felt Like He Was Making His Debut Ahead Of 100th Test

The news is the second devastating blow for Australian cricket within 24 hours with fellow great, Rod Marsh, also dying on Friday having suffered a major heart attack last week. Shane Warne played 145 Tests and 194 ODIs between 1992 and 2007 and took a combined 1001 wickets during his storied international career.

Having made his Test debut at the SCG in 1992, Shane Warne became the backbone of the Australian team in the late 90s and early 2000s of the dominating Australian team across the formats. He was a member of Australia’s World Cup win in 1999, and five Ashes-winning sides between 1993 and 2003.

The legspinner carved a storied career during his time playing for Australia and was affectionately called ‘Warnie’. He remained a popular figure post-retirement, forging a successful broadcasting career as a commentator and a pundit. Post-retirement, Warne famously guided Rajasthan Royals to a fairy-tale title win in the inaugural edition of the Indian Premier League (IPL) in 2008 as their captain and coach.

Here is how the cricketing fraternity reacted to the unfortunate demise of Shane Warne:

The day I get my kit, with my new squad number… all came from one man, my idol growing up, the reason I bowl leg spin and the reason I now wear 23 😢😢 sad day for the world of cricket!! RIP @ShaneWarne a true cricketing legend! pic.twitter.com/KN3zfpankK

Can’t believe we are typing this… Rest In Peace, Legend #ShaneWarne 💐 pic.twitter.com/jTIzXiB4Qi

💔 Farewell Shane Warne, one of the greatest to ever grace the game 😔 pic.twitter.com/JjaETectvf

"Whenever he came to the wicket, change came over the game of Cricket"

My mind just cannot accept that Shane Warne is no more. Gone too soon.. Thoughts and prayers with his family and friends..RIP Warnie 🙏🏻 pic.twitter.com/YgfvY1WaS0

Sad, speechless, and completely shocked. An incredible loss to cricket. I have no words. Thank you for everything you’ve done for the sport. Rest in Peace, Shane Warne. Sending my condolences to his loved ones. pic.twitter.com/wO7VenwVSD

Not sure I can say much. I mean just shell-shocked.

The Sheikh of Tweak. The Wizard of Oz. The cricketer who made leg-spin a connoisseur's delight.

Tell me it's not true please

Very few can match their attitude with raw talent. #ShaneWarne made bowling look like magic! RIP

Among 708 Test wickets and 293 ODI wickets, Shane Warne was also the 1st captain to win the IPL.

And who can forget THAT ball of the century?

A massive loss for the world of cricket.

A legendary spinner and one of the most influential players in the history of the game breathed his last today.

Sometimes it’s difficult to remember people who you idolize are human .
It’s impossible to think they’ll leave us.

Such a young age with so much more to give to our game. This is a big loss to the cricketing world.

Cannot believe it.
One of the greatest spinners, the man who made spin cool, superstar Shane Warne is no more.
Life is very fragile, but this is very difficult to fathom. My heartfelt condolences to his family, friends and fans all around the world. pic.twitter.com/f7FUzZBaYX 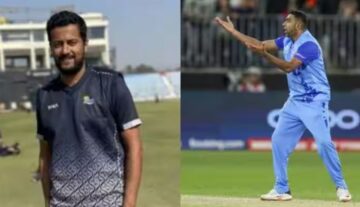