The Hundred has seen great success in its first edition – be it a swashbuckling knock or some extraordinary spells. However, the final between Southern Brave and Birmingham Phoenix at the Lord’s in London was seen as a bizarre dismissal of Liam Livingstone.

Southern Brave lost the toss and asked to bat first. However, the Southern Brave played some outstanding cricket by posting a huge total of 168 runs on the back of Paul Stirling and Ross Whiteley who scored 61 runs off 36 balls and 44 runs off just 19 balls respectively as well.

Meanwhile, the Birmingham Phoenix had a poor start but Liam Livingstone did exceptionally well and left his mark once again in the tournament. The England International player played a quickfire 46-run knock from 19 balls. On the departure of Livingstone, Birmingham Phoenix failed to capitalize more as well.

However, Liam Livingstone got out in a bizarre fashion despite looking very comfortable ever since he came to bat in the middle. He hit the ball in the air and due to bad timing, the ball was approaching a fielder but he couldn’t grab the catch and eventually dropped the catch.

Meanwhile, another fielder of Southern Brave took the ball and threw it towards the wicketkeeper. But before reaching the keeper, the ball directly hit the stumps and he was out of the crease by just an inch as well. However, it was the batsman’s fault who was not quick enough while taking runs in between the wickets. However, the dismissal of Liam Livingstone changed the course of the game entirely and Southern Brave eventually won the match quite convincingly.

However, Liam Livingstone was awarded the most valuable player of the tournament award for his stunning performances throughout the tournament – The Hundred. 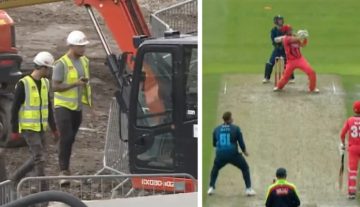