With the improved quality of bats in world cricket, it doesn’t happen often that a bat gets broken while playing pacey deliveries. However, one such incident took place in the game between Gujarat Titans (GT) and Chennai Super Kings (CSK) as a fiery full-length delivery from Lockie Ferguson broke the bat.

After losing the first four games five games they have played in the IPL 2022, Chennai Super Kings seem to have started their revival. They won their last game against Royal Challengers Bangalore and are in a strong position against Gujarat Titans as well. Gujarat Titans won the toss and asked CSK to bat first. The team lost two wickets on a total of 32 runs but Ruturaj Gaikwad and Ambati Rayudu made a brilliant partnership of 92 runs for the third wicket.

The partnership was going well, however, an interesting incident took place in the 13th over of the innings. Lockie Ferguson bowled the third delivery of the over almost in the blockhole to Rayudu. The batter came down the track and jammed down the yorker. However, it hit right on the toe and the toe-end of Rayudu’s bat flies off.

Here is the video of Lockie Ferguson breaking the bat of Ambati Rayudu: 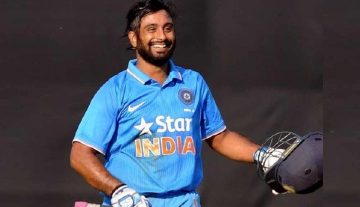