India and South Africa are locking horns with each other in the final game of the five-match T20I series at the M Chinnaswamy Stadium in Bengaluru. In the first innings, South African pacer, Lungi Ngidi got the wicket of the Indian opener, Ishan Kishan with a brilliant slower yorker.

Earlier, after winning the toss, the visiting skipper, Keshav Maharaj won the toss and decided to bowl first because of the unpredictability of the weather. While the Indian skipper, Rishabh Pant, made no changes to the winning combination, the Proteas had three changes: Kagiso Rabada, Tristan Stubbs, and Reeza Hendricks replaced Marco Jansen Temba Bavuma, and Tabraiz Shamsi.

In the rain-curtailed game which was reduced 19-0ver a side, the men in blue started off well as Ishan Kishan smashed back-to-back sixes off the 2nd and 3rd delivery of Keshav Maharaj’s first over, signaling his intent. Maharaj immediately opted to bring in the fast bowlers and the move worked for the Proteas. Ngidi applied the pressure with a few dot balls before bowling the money delivery.

ALSO READ: India are the favorites: Morne van Wyk ahead of 5th T20I

Lungi Ngidi bowled an off-cutter almost on a yorker length and Kishan was early into his shot. He managed an under-edge that crashed into the stumps, providing South Africa the early breakthrough they were looking for in the second over the game itself. In his next over, Lungi Ngidi also got the wicket of Kishan’s opening partner, Ruturaj Gaikwad just before another rain interruption.

Here is the video of the wicket taken by Lungi Ngidi: 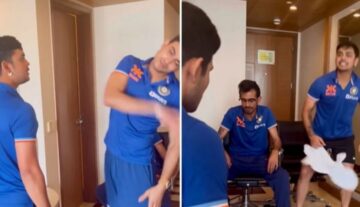