The roof on a makeshift grandstand was seen getting collapsed at Galle International Stadium owing to the heavy rains, delaying the start of the second day’s play between Sri Lanka and Australia. No spectators were in the stand when the incident took place, with Australia’s team only just arriving at the ground. Rain began falling around before the scheduled first ball on day two of the first Test, with strong gusts blowing in off the coastline.

According to the reports of the Australian Associated Press, the ground staff did a brilliant job in covering the entire ground covered as the rain blew in sideways, but metal sheets secured by ropes covered the small concreted seating area on the eastern side of the Galle stadium blew off. The entire roof then buckled, with officials now considering how to secure the metal before play can begin.

The metal — designed to cover a small concrete seating area —had only been secured by rope in the days before the Test match, and the site lay in ruins before being secured by the ground staff. A large glass panel at the front of a marquee, which hosted tour groups on day one, also fell and smashed.

Small pieces of corrugated iron fell from another roof, while staff on the frame worked through the wind resulting in the collapse of the sightscreen. The decision review system is expected to be unavailable for the rest of the day due to the damage sustained in the drama.

The weather is so intense here at Galle that a small enclosure/stand has just collapsed. #SLvAUS pic.twitter.com/uBkzKONxBP

The Australian team went to their bus to return to their hotel at one stage, but they were eventually called back to the change rooms by umpires. But play resumed at 1:45 pm local time, with 59 overs to be bowled before the new scheduled stumps time of 6 pm.

Australia faces a crucial first hour after going to stumps at 3-98 in reply to Sri Lanka’s 212. Only bad weather can prevent a result in the match, with 13 wickets falling on day one. A three-day Test is predicted due to the pitch conditions. Rain also continued to fall past the scheduled start of play of 10 am local time, with ground staff struggling to keep the entire outfield covered amid the gusts of wind 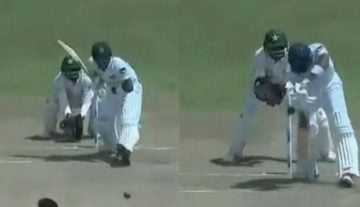 Videos
By CricShots - Jul 19, 2022
Yasir Shah Cleans Up Mendis With Warne-like ‘Ball of the Century’