In what has been an eventful affair so far between South Africa and India in the second Test of the series at The Wanderers Stadium, Johannesburg. Day 4 of the proceedings has been affected by rain but the contest had a lot of thrill and excitement on moving day. Both the teams were putting in every effort to get an upper hand in the game and that is what resulted in some intriguing verbal battles. The scenarios got so intense that even the on-field umpire Marias Erasmus feel the heat.

On Day 3, Marais Erasmus passed an epic remark on how things unfolded and said that the entire course of action almost gave him a “heart attack”. In the 10th over of South Africa’s second innings, Aiden Markram departed on the final delivery of Shardul Thakur’s over.

However before the Proteas batter was dismissed, Shardul Thakur had twice appealed in the same over. This led to things getting charged up in the middle. After the over, while the players were exchanging sides, Marais Erasmus was heard saying: “you guys are giving me a bloody heart attack after every over” on the stump mic.

Things were pretty much the same in the entire match on day 3. India had started the day with both Cheteshwar Pujara and Ajinkya Rahane scoring their respective fifties. However, Proteas prime pacer Kagiso Rabada brought back the momentum for his team.

Rabada managed to get to wickets of both the batters back to the pavilion in quick succession. When India had lost four wickets, Rishabh Pant walked onto the field. He then was sledged by Rassie van der Dussen. Eventually, Rishabh Pant threw away his wicket whilst playing a rash shot. This then gave rise to a lot of debates on his shot selection as the cricketing fraternity chimed in with mixed reactions on it.

Later, when Jasprit Bumrah came in to bat, things were charged up between him and Marco Jansen. The southpaw pacer seemed to be testing the patience of Bumrah as he struck with a barrage of bouncers. 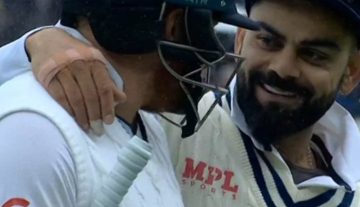 News
By CricShots - Jul 4, 2022
Jonny Bairstow Not Displeased After His Banter With Virat Kohli