India and South Africa are locking horns with each other in the fourth game of the five-match ODI series at the Saurashtra Cricket Association Stadium in Rajkot. In the first innings, South African pacer Marco Jansen got the wicket of the Indian batter, Shreyas Iyer in the powerplay itself.

Earlier, after winning the toss, the visiting skipper, Temba Bavuma won the toss and decided to bowl first because of the unpredictability of the conditions. While the Indian skipper, Rishabh Pant made no changes to the winning combination, the Proteas had three changes as Kagiso Rabada, Wayne Parnell, Reeza Hendricks made way for Marco Jansen, Quinton de Kock, and Lungi Ngidi.

India didn’t witness a great start as the opener, Ruturaj Gaikwad couldn’t carry over his form from the previous knock and was dismissed early by Lungi Ngidi in the second over, Iyer came in to bat at No.3 and got going with a boundary off the first ball. However, he didn’t last long after with Jansen getting the better of Iyer on the very next ball, courtesy of an excellent review.

Shreyas Iyer failed to judge the ball well which jagged back in but the umpire turned it down thinking it might have pitched outside leg. However, DRS confirmed it was very much in line and the three reds ensured that Iyer goes back after scoring 4.

Here is the video of the wicket taken by Marco Jansen: 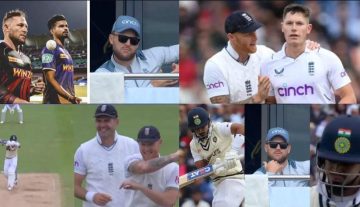 Videos
By CricShots - Jul 4, 2022
Shreyas Iyer Succumbs To The Short-ball Trap Of The England Team