Australia and South Africa are locking horns with each other in the second game of the three-match series at the Melbourne Cricket Ground. Trying to sneak singles from the quality fielders who are placed within the 30-yard circle is always a risk in cricket, especially in the longest format of the game and the batters might have to pay a heavy price for their bravery. The Proteas skipper, Dean Elgar experienced the same when he was caught short of the crease by Marnus Labuschagne with a direct hit.

After taking a lead of 1-0 in the series, Australia came out all guns blazing in the opening session of the Boxing-day test with their bowlers churning out four wickets. The visitors ended the first session on 58/4 as the Australian bowlers kept attacking in the right areas. However, apart from Australia’s quality bowling, South Africa conceded two wickets on needless risks taken by batters, and one of those included Dean Elgar’s run-out.

ALSO READ: R Ashwin Reveals His Conversation With Shreyas Iyer In The Middle

Mitchell Starc was bowling the 23rd over of the innings and he bowled a fuller delivery on the 4th stump line on the penultimate ball to Dean Elgar. The batter pushed the ball just right to the mid-off and set off for a risky single. However, Marnus Labuschagne churned out a brilliant fielding effort to dismiss the batter.

Marnus Labuschagne moved swiftly to his right and hit the stumps while on move with a lightning-quick throw. Elgar was caught short of the crease and so South Africa lost one of the reliable batters in the team.

Here is the video of the brilliant throw from Marnus Labuschaagne:

Fans soon praised Labuschagne for his accurate and quick throw on social media.

Labuschagne throws down Elgar's stumps with a direct! #AUSvSA pic.twitter.com/QbKsVbY8SJ

Truly hate run outs in test cricket. It is just dumb stuff and there’s no need for it. #AUSvSA

Elgar doesn’t have enough legs and runs out of Christmas luck. #AUSvSA

There's always a run-out in a batting collapse 👀👀#AUSvSA #BoxingDayTest

MARNUS! That was a brilliant throw but a silly silly run. #AUSvSA 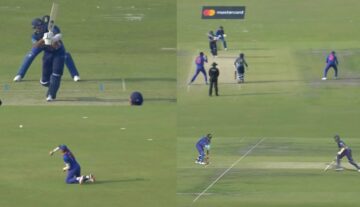