The fiery New Zealand fast bowler, Matt Henry bowled a brilliant spell on the first day of the ongoing Test between South Africa and New Zealand as he scalped as many as 7 wickets and conceded 23 runs. New Zealand bowled out the opposition on a total of 95 and scored 116/3 in the first innings at the end of the day’s play with Henry Nicholls and Neil Wagner at the crease.

New Zealand is currently locking horns with South Africa in the first Test of the two-match series. New Zealand had asked South Africa to bat in bowling-friendly conditions after winning the toss. They bowled out the opposition for a total of 95 runs. Matt Henry played an important role in taking seven wickets for 23 runs. The visitors got bundled out for a meager score of 95 runs.

New Zealand scored 116/3 in response at the end of day 1. Henry Nicholls is playing at the crease with a knock of 37 runs from 54 balls. Neil Wagner is also playing at two runs. Henry has been struggling to be a regular member of the Test team and Trent Boult missing the game gave him the opportunity to play the Test.

With Boult on paternity leave, the Christchurch-born Matt Henry relished the chance to perform in front of his home crowd. He drew the first blood on the fourth ball he removed South African skipper, Dean Elgar, for one with a ball that nipped away off the pitch. When South Africa looked to be showing some resistance with Hamza and Kyle Verreynne putting on 33 for the sixth wicket.

Matt Henry removed the pair along with Kagiso Rabada and debutant Glenton Stuurman in an eight-ball burst. Alongside Henry, Tim Southee, Kyle Jamieson, and Neil Wagner each took one wicket.

Here is the video of the brilliant spell from Matt Henry: 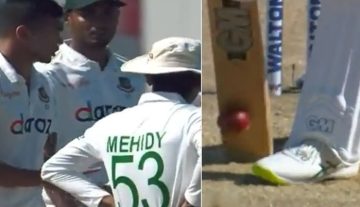 Videos
By CricShots - Jan 4, 2022
Bangladesh Took The Worst DRS Call As Ball Was Hitting Middle Of The Bat