Indian cricketer Stuart Binny and wife Mayanti Langer have often remained under the scrutiny from internet trolls trying to question their marriage. The hatred level so high that Stuart had to block people from commenting on his Instagram account.

However, despite all the hatred, the couple is having a strong relationship and it was proven in a sweet interview during the current ongoing season of the Karnataka Premier League.

Currently, Binny is playing for the Belgavi Panthers and during the game against the Bengaluru Blasters, he smashed 87 off just 46 balls including 8 fours and 5 sixes. But more than the batting performance, his interview with his wife became memorable in the minds of the crowd. The icing on the cake was that Binny was interviewed on his performance by wife Mayanti Langer on their wedding anniversary.

Watch the video of Binny being interviewed by Mayanti Langer below:

@MayantiLanger_B this are the best days for you & your hubby & happy anniversary day👩‍❤️‍👩❤️happy to watch husband interviewed by wife ❤️ pic.twitter.com/23CVmhEYyP 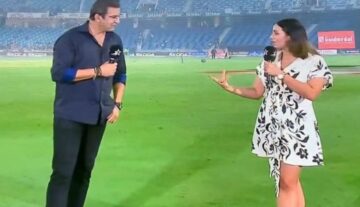