The Mumbai Cricket Association will be hosting a special function on October 29 in which they will be giving a special gift to the legendary Indian cricketer, Sunil Gavaskar with a special permanent box, and name a stand after former India captain Dilip Vengsarkar at the iconic Wankhede Stadium on October 29.

Along with Gavaskar and former Indian cricketer, Dilip Vengsarkar, the association, in an urgent meeting of its Apex Council on Monday, decided to invite former ICC, BCCI, and MCA president Sharad Pawar for the function at the Wankhede Stadium. As per the quotes in the Times of India, MCA secretary, Sanjay Naik said, “All three have confirmed to us that they will attend our special function.”

The MCA had decided last year to gift Gavaskar a permanent box at the Wankhede Stadium to honor him on the occasion of 50 years since his international debut against the West Indies in 1971. Three blocks of the North Stand will be now be named after Vengsarkar, who played 116 Tests.

Dilip Vengsarkar will thus join fellow stalwarts of Mumbai cricket, Gavaskar and Sachin Tendulkar to have stands named after them at the Wankhede. The function to honor Gavaskar and Vengsarkar was originally supposed to be held on March 9 this year but was delayed due to Covid issues.

ALSO READ: Rashid Khan gets cake facial on his birthday

Earlier this year, MCA president, Vijay Patil had said, “We are delighted to honour one of the world’s greatest opening batsman to ever play the game and India’s pride, the legendary Shri Sunil Gavaskar with a permanent box at our Iconic Wankhede stadium. Today, we gave him a tour of the proposed box which will be formally assigned on March 9 when we felicitate the Indian legend on completing 50 years since making his international debut.” 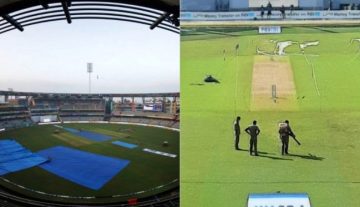