Pakistan opening batsman Imam-ul-Haq got a nasty blow on his head during the second ODI against New Zealand at Abu Dhabi on Friday night (November 9). However, his medical reports have cleared him from any dangerous injury scare.

Pakistan was chasing the 210-run target in that day/night match while they had a good opening partnership as the openers Imam-ul-Haq and Fakhar Zaman put a 54-run opening partnership. On the first ball of the 13th over of that innings, New Zealand pacer Lockie Ferguson provided a short-pitched delivery to Imam, who went for a pull shot but missed that and the ball hit hard on the grille of his helmet.

Soon, he fell on the ground but remained conscious. After getting some treatment by the physio, Imam stood on his feet but soon he lost his balance and decided to return to the dressing room. The left-handed batsman was retired hurt on 16 off 34 balls.

In the quick time, the 22-year-old was taken to the hospital for CT scans and MRI where his reports found no serious damage. According to Pakistan Cricket Board (PCB), Imam will now remain under the team physio’s observation for the next few hours.

However, that injury didn’t hurt the Pakistan team as they comfortably won that match and equaled the three-match ODI series by 1-1 with one match to go. After New Zealand decided to bat first, Pakistan restricted them to 209/9 at the end of 50 overs. While the young pacer Shaheen Shah Afridi was the stand-out bowler for Pakistan with the bowling figure of 9-1-38-4, Ross Taylor was the only stand-out performer in New Zealand innings by remaining unbeaten on 86 off 120 balls (3 fours and only six).

In reply, after Imam was retired-hurt at the score of 54/0, Fakhar Zaman and Babar Azam extended that new opening partnership for 101 more runs as Pakistan lost their first wicket on 155 runs. Fakhar’s 88 off 88 balls (11 fours) and Babar’s 46 off 50 balls (5 fours) helped Pakistan to chase that target in 40.3 overs after losing four wickets. Pakistan won that game by 6 wickets with 57 balls remaining. 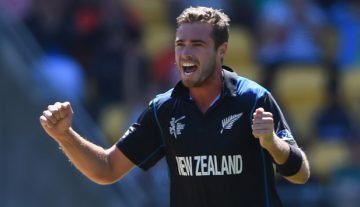 Article
By Aditya Pratap - Oct 28, 2017
We are excited rather than nervous believes Tim Southee