Pakistan’s head coach and chief selector Misbah-ul-Haq said Sri Lanka’s top players should not pull ut their names for the limited-overs series in Pakistan after they were assured of head-of-state-like security by the government. Ten of Sri Lanka’s best players have pulled out of the three-match ODI series and as many Twenty20s in Pakistan due to security issues which included ODI captain Dimuth Karunaratne and Twenty20 captain Lasith Malinga.

“Being a cricketer everyone’s life is very precious,” Misbah said on Wednesday. “We are also here, rest of the players are also here … I think they should have had considered it when the government is giving assurances.”

“Pakistan’s government is trying its best, security agencies are trying their best, the Pakistan Cricket Board is trying its best and we need the support of the world,” he said. “No doubt what happened to them (was unfortunate), such things do happen in other parts of the world, but you go out and play there. They should come here too, what’s the problem with that.”

However, all the major teams have avoided touring Pakistan since that 2009 attack. and Misbah said he hopes more teams will come after Sri Lanka series.

“Pakistan is not a cricketing nation which should be sidelined from cricket,” he added. “It has a rich history, we had won the T20 World Cup, we had been the No. 1 test team in the world, we had won the 50 overs World Cup. Pakistan is a big team, everyone should think about it.”

The Sri Lanka team have arrived on Tuesday in tight security and rested in their team hotel on Wednesday. n the other hand, Pakistan team’s practice session was cancelled on Wednesday due to heavy rain. Both the teams will have a training session at National Stadium on Thursday. The three ODIs on Sept. 27, 29 and Oct. 2 will be played in Karachi while the three Twenty20s will be played at Lahore on Oct. 5, 7 and 9 respectively. 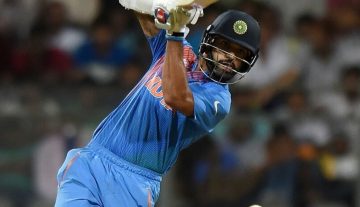