India and New Zealand are currently playing in a three-match T20I series in India, where India have already bagged the series by 2-0. The series began only 72 hours after the T20 World Cup 2021 Final in Dubai, where Australia overcame the New Zealand challenge to clinch their maiden T20 WC title.

McClenaghan congratulated AB de Villiers for an amazing career on Twitter. He wrote, “Amazing career. The leader in the 360 game that bowlers now fear. Genuine champion.”

McClenaghan was not in the mood to entertain the fan and he came up with a befitting response. He called the ongoing series “meaningless” and how the series is scheduled just three days after the T20 WC final.

He said: “Did they? You mean in meaningless series 72 hours after a WC final defeat with 3 games in 5 days playing a team with 10 days rest in their home conditions?”

Did they? You mean in meaningless series 72 hours after a WC final defeat with 3 games in 5 days playing a team with 10 days rest in their home conditions? https://t.co/jldmmH58YZ

New Zealand landed in India after the T20 World Cup final and played the first T20I on November 17, where Rohit Sharma-led team won easily by five wickets in Jaipur. The caravan then moved to Ranchi, where the Indian team didn’t let their guard off and registered yet another comprehensive victory by seven wickets.

The third T20I of the series is currently underway in Kolkata, where Ishan Kishan and Yuzvendra Chahal found a place in place of KL Rahul and Ravichandran Ashwin. On the other hand, Tim Southee is rested ahead of the Test series and Mitchell Santner is captaining in his absence. 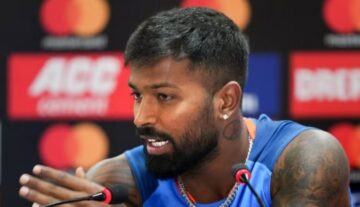