Videos
Mitchell Starc Sent Back Jason Mohammad By sending His Stump For A Cartwheel
By CricShots - Jul 21, 2021 5:02 pm
Views 1K

After been asked to bat first, the Australian openers, Josh Phillipe and Ben McDermott had a good partnership in the starting. Mitchell March looked in good shape after the loss of both openers. But March and Henriques couldn’t stay on the pitch for long. Carey and Ashton Turner brought Australia back in the match as they scored 104 runs partnership.

Alex Carey played a brilliant knock of 87-ball 67 and Turner had also amassed 49 runs. The Aussies ended with 252 in 49 overs. West Indies had a poor start as Mitchell Starc managed to take some early wickets for the visitors as he dismissed Evin Lewis and Jason Mohammad.

Kieron Pollard took charge of the match as he played a gritty knock of 57-ball 56 alongside a partnership with Alzarri Joseph. But Mitchell Starc took a 5-wicket haul as West Indies lost the first ODI by 133 runs. He was also named the man of the match.

ALSO READ: Deepak Chahar shares what Rahul Dravid said to him before going to bat

Mitchell Starc at the start of 2nd innings took some early wicket of Lewis. In his second over, he bowled Mohammed with a beautiful delivery. On the first ball of his 2nd over, the lanky pacer bowled to Mohammed who scored just 2 runs from 6 balls. The ball had a good pace and with a bit of swing sent the off stump of Mohammed cartwheeling and 2nd wicket for Starc in the first ODI match.

Mitchell Starc gets a wicket!

5 wickets haul for Starc against WI

Starc is back . 😎#AUSvWI #Starc pic.twitter.com/78XU7E1ZRe 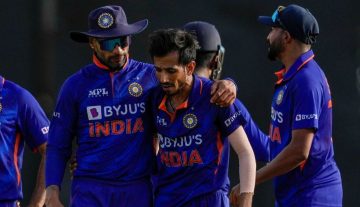