Captain Mithali Raj and Punam Raut both hit half-centuries to guide the India team to a series-clinching five-wicket win over South Africa in the second ODI on Friday. India restricted South Africa to a total 247-6 after choosing to the field and then took an unassailable 2-0 lead in the three-match ODI series.

Pace bowler Shikha Pandey (2/38), left-arm spinner Ekta Bist (2/45) and leg-spinner Poonam Yadav (2/42) finished with two wickets each. While chasing 248which eventually was India’s highest ever chase, India lost their openers Priya Punia (20) and Jemimah Rodrigues (18) very early and slipped to 66 for two in 12.5 overs. However, Punam Raut (65 off 92) and Mithali Raj (66 off 82) anchored the chase by adding a 129-run partnership for the third wicket.

However, Marizanne Kapp (1/29) successfully broke the partnership when she dismissed Mithali which caught by Laura Wolvaardt in the 40th over. In the next over, Punam too got out when she gave a simple catch to Kapp off Ayabonga Khaka and left India at 196 for four in 40.1 overs. Harmanpreet Kaur then scored an unbeaten quick-fire 27-ball 39, including five boundaries and a six, to take India over the finish line with 12 balls to spare.

India will take on South Africa in the third and final ODI on October 14 at the same venue.

That will be a wrap from Vadodara – #TeamIndia win the 2nd ODI by 5 wickets and take a 2-0 lead in the series 🇮🇳🇮🇳 #INDvSA @Paytm pic.twitter.com/3fGOqcofl8

Both @M_Raj03 and @raut_punam scored the fifties and India successfully chase their highest ever score and registered a win by five wickets and sealed the series with one to go.#INDvSA pic.twitter.com/Pmvb9DuZT0 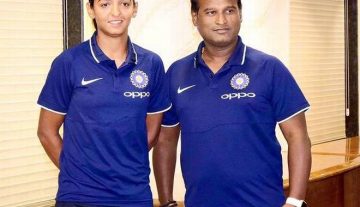 News
By Sandy - Dec 4, 2018
Harmanpreet Kaur Defends Ramesh Powar And Wants To Bring Him Back As Coach