Former Delhi Capitals assistant coach Mohammad Kaif has opined that skipper, Rishabh Pant is the backbone of the batting unit and he will play a crucial role in their qualification for playoffs. Kaif also added that Pant is unable to convert the starts he has got in the tournament so far but he is looking in good touch at the crease.  DC has been doing well in IPL 2022 and they have a chance to reach the playoffs. They have won six matches out of the 12 games and is positioned at the fifth spot in the points table.

DC skipper, Rishabh Pant has also contributed to the team but they will need a big knock from him in the upcoming games. The southpaw batter hasn’t been able to capitalize on the starts. He scored 281 runs from 11 matches at 31.22. Reflecting on Pant’s role in the team, Mohammad Kaif thinks that he will play a crucial role if Delhi Capitals want to qualify for the playoffs.

ALSO READ: Ravichandran Ashwin Reveals He Has Worked On His Batting Technique

During a recent chat with Sportskeeda, Mohammad Kaif said, “Rishabh Pant has been the backbone of their batting and he has a big role to play if Delhi are to qualify after the upcoming matches.”

In their last game against Rajasthan Royals, Rishabh Pant played a cameo of unbeaten 13 runs from four balls smacking a couple of sixes. Mohammad Kaif said that the wicket-keeper batter needs to convert his starts into a big knock.

Elaborating the same, Mohammad Kaif said, “Rishabh Pant hasn’t played a big knock yet, but he has looked good at the crease. Whatever glimpse we have seen, it looks like he will win the game for his team if he bats for long,” he stated. “Starting your innings is the toughest in any format and although Pant is getting the starts, he has been unable to convert them. Sometimes he plays bad shots while sometimes he gets good deliveries.”

DC will play their next match against Punjab Kings on May 16. 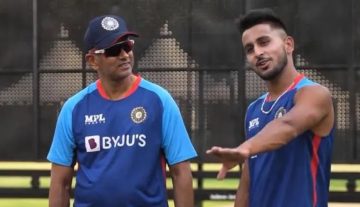