The eighth game of the ongoing season between Multan Sultans and Islamabad United was a batting-friendly game. Overall, it was a thrilling game but none of the bowlers failed to do much from both teams. Batting first, Multan Sultans posted a humongous total of 217 for the loss of 5 wickets in their allotted quota of 20 overs. Tim David came out all guns blazing as he amassed 71 off just 29 balls with the help of 6 fours and 6 sixes at an imperious strike rate of 244.83.

On the other hand, Rilee Rossouw was the highest run-getter as he played a brilliant knock of 35-ball 67 with the help of 4 fours and 6 hits over the fence. Shan Masood scored 43 off 31 balls including 5 fours and 2 sixes. In reply, Islamabad United did put up a great fight in the run-chase. They were bowled out for 197 in 19.4 overs.

While all others failed to deliver the goods, skipper Shadab Khan played was the pick of the batters as he amassed 91 off 42 balls including 5 fours and 9 sixes. Meanwhile, Multan Sultans skipper, Mohammad Rizwan witnessed a horrifying run-out and it became a talking point on social media. He was dismissed in a bizarre fashion during the penultimate ball of the fifth over.

It all started when Mohammad Wasim Jr bowled a full toss delivery to Shan Masood. The southpaw tried to nudge the ball down the ground. But, it ended up hitting the bowler’s hand in the first place. As it turned out, the ball just ricocheted off his hand and then went on to the stumps at the non-striker’s end. Meanwhile, Mohammad Rizwan was miles short of his crease.

Mohammad Rizwan didn’t even expect the kind of dismissal in the first place. In fact, literally taken aback by the mode of his dismissal. He smashed his bat on the pitch in anger before going back to the dressing room. The video clip of Rizwan’s bizarre run-out has gone viral on the internet.

Despite his strange dismissal in the fifth over, Mohammad Rizwan and his men had no intention of bogging down. Multan Sultans posted a massive total on the board. The bowlers went on to defend the total and won the game by 20 runs. Khushdil Shah was the pick of the bowlers as he took four wickets to his name. Tim David was named the Man of the Match for his scintillating batting. 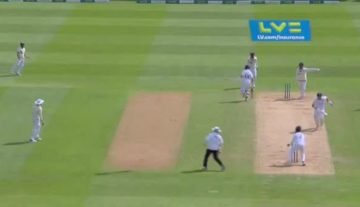