The inaugural World Test Championship (WTC) final between India and New Zealand has turned out to be a disappointing game for the fans due to the frequent rain interruptions. As a result of the same, just 141.2 overs of cricket has been played by the end of Day 3, and a maximum of 196 overs can be bowled now including a reserve day to attain a result. The fans and experts alike have been all over the ICC for organizing the most important Test match in the history of the sport in England where weather is always unexpected.

The fans were expecting to witness a close fight but the rain has played a huge spoilsport. To make things worse, the start of play on Day 5  has also been delayed due to a slight drizzle. Even as the fans are lashing out at the ICC for poor scheduling, former India cricketer Mohammed Azharuddin has come out in support of the apex council.

Mohammed Azharuddin lauded the ICC for adding a reserve day while deciding the playing conditions to eke out a result from the game. Azharuddin had tweeted, “If a test match is to be decided by overs bowled, then there would never be a need to call it a five-day game. Adding a reserve day for the WTC in itself is an excellent decision. A draw exists as a result in a test match.”

If a test match is to be decided by overs bowled, then there would never be a need to call it a five-day game. Adding a reserve day for the WTC in itself is an excellent decision. A draw exists as a result in a test match. #WorldTestChampionship #WTCFinal2021

As far as the cricket on the field is concerned, both India and New Zealand have played superbly so far. The fans have witnessed some high-quality cricket thus far and though the Kiwis seem to be ahead in the game as of now, things can change quickly with conditions favoring the bowlers. After being asked to bat first, India’s openers started off well with Rohit Sharma and Shubman Gill adding 62 runs together.

However, they lost the plot soon and eventually got bundled out for just 217 runs in the first innings. Kyle Jamieson was the pick of teh bowlers for New Zealand as he ended the game with the figures of 5/31. In response, New Zealand openers started off cautiously and they managed to add started well adding 70 runs before both Tom Latham and Devon Conway were dismissed. The latter is the only half-centurion of the Test so far as the Kiwis are 101/2 in their first innings. 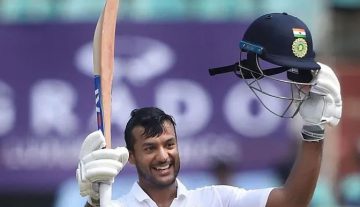