India’s promising fast-bowler Mohammed Shami’s wife has reportedly claimed that the sportsman is having an illicit affair. In a bid to expose the Shami’s extra-marital affair, she posted several screenshots of Messenger and Whatsapp messages on her Facebook wall.

Married to Shami since 2014, Hasin Jahan reportedly alleged that the bowler is having several extra-marital affairs simultaneously. Notably, the post, which was uploaded from an unverified Facebook account, was titled as ‘Shami’s enjoyment’ and had several pictures of the pacer’s text messages to multiple women. 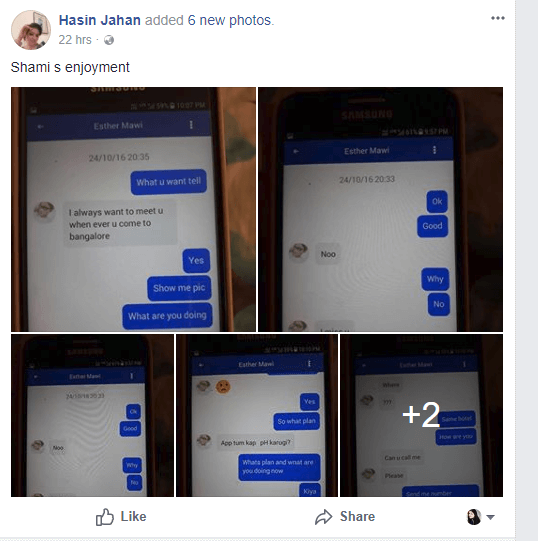 According to a new channel, Jahan revealed that she found Shami’s phone, gifted to him by his IPL franchise Delhi Daredevils in 2014, hidden in his BW  and she found the chats on the phone. While speaking to ABP news, she said, “Whatever I have posted is just the tip of an iceberg. Shami’s acts are far more heinous. He has relationships with multiple women.”

When she got hold of his phone, it was locked but after multiple attempts, she managed to unlock it and get an access to all the chats. Jahan also said that Shami and his family have been physically and mentally torturing her; not only this, she said that they have been making attempts at killing her.

In Jahan’s words, “Everyone in their family used to torture me. His mother and brother used to abuse me. The tortures continued till 2-3 am in the morning. They even wanted to kill me. I tried to convince myself for the sake of my family and daughter but he kept on harassing me and when I found those obscene chats with multiple women, all hell broke. I cannot tolerate this anymore and I have decided to take legal actions with all the available evidence.”

As per the report, she is planning to take legal actions against the fast-bowler and his family members and had even suggested a local police station in Uttar Pradesh in January.
Shami is currently in Dharamshala playing in the Deodhar Trophy for India A.

The account owner also posted Shami’s pictures with some of them.

Both Shami and his wife were unavailable to comment on the recent news.