The Indian fast bowler, Mohammed Siraj ran through Somerset’s batting line-up on his debut for Warwickshire as he managed to take a five -wicket haul to shine in the ongoing County Championship Division One contest between Somerset and Warwickshire at Edgbaston in Birmingham. Pakistan opener Imam-ul-Haq was Siraj’s first-ever wicket in the County Championship as he managed an outside edge straight to the wicket-keeper.

Somerset was 17/1 in the first lengthy rain delay during the match. Mohammed Siraj then dismissed George Bartlett and wicket-keeper James Rew on back-to-back deliveries. Lewis Gregory managed to stabilize the inning for Somerset as he played an unbeaten knock of 60 off 93 but Siraj snapped his fourth wicket to hurt Somerset as Warwickshire began their bid to avoid relegation to Division Two in style.

Warwickshire managed to keep Somerset reeling at 182/8 and would hope to bowl them out early on Day 2 and get a handsome first-innings lead. A natural swinger of the ball, Mohammed Siraj has played for India 26 times across the formats, taking 56 wickets. In total, he has taken 403 wickets in 207 career matches with 194 of those in first-class cricket.

Siraj’s five wickets included the dismissals of Imam-ul-Haq, George Bartlett, James Rew, Lewis Gregory, and Josh Davey. Meanwhile, Warwickshire failed to take full advantage of their scintillating bowling show, led by Siraj. At the time of writing, they were left reeling at 69/3, trailing 150 runs in the first innings.

Mohammed Siraj finishes with figures of 24-6-82-5 as Warwickshire bowl Somerset out for 219. #LVCountyChamp pic.twitter.com/jneZp5ZcDj

Siraj has been enduring poor red-ball form of late, with just 7 wickets in the last three overseas Tests, including the one at Edgbaston against England in July where he leaked runs at an economy of 5.73 and 6.53 in the two innings.

After joining Warwickshire, Mohammed Siraj had said, “I can’t wait to join up with the Bears squad. I have always enjoyed playing in England with India and I’m excited to experience County Cricket.”

ALSO READ: Bumrah And Harshal Return To Indian Squad For T20 WC, Shami Is back For Home Series

He further added, “Edgbaston is a world-class stadium and the atmosphere it created this year for the Test was special. I am really looking forward to making it my home in September and hopefully helping the Bears end the season well.” 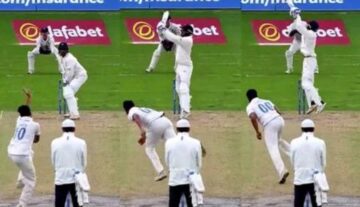