India’s Asia Cup campaign started on a high when they suffered a loss against their arch-rivals Pakistan by 5 wickets followed by a victory against Hong Kong. Team India’s journey to Super 4 was rather easy, however, what transpired in the Super 4 stage for the Indian team has left the fans shocked and furious.

Team Indian lost the second consecutive Super 4 match and the Pakistani fan Momin Saqib turns SRK to roast Indian fans. The men in blue were in shock as they entered the Dubai International Cricket Stadium on Tuesday evening to play their second Super 4 game which was against Sri Lanka.

In a must-win game, the Indian team failed to handle the pressure well and now they have almost lost the chance to reach the final and are now out of their hands. During India vs Sri Lanka game, Momin Saqib turns SRK and roasted the Indian fans and the Indian team with his antics.

In a video posted on Twitter by a user name Ayesha Masroor, Momin Saqib can be seen mimicking SRK and talks about how Pakistani fans wanted India to play the final with Pakistan. After losing their first Super 4 game against Pakistan, India had to win the match against Sri Lanka, but their bowling woes while defending a total came to the fore once again and hurt them massively.

Sri Lanka skipper Dasun Shanaka invited the Indian team to bat first and while the Indian batsmen got started, they couldn’t convert them to a big score, except for Rohit Sharma who scored 72 runs for his team. With wickets falling at regular intervals, team India could only get to a sub-par total of 173. Though the match went right down to the wire, it was Sri Lanka’s skipper along with his teammate Bhanuka Rajapaksa who took their team to the finishing line, almost eliminating India from the race to the final. 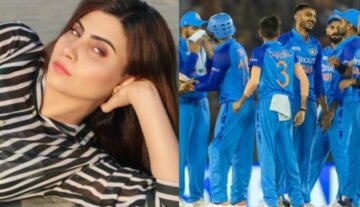 Social Shots
By CricShots - Sep 21, 2022
Pakistan Actress Got Trolled For Attempting To Take A Dig At Team India